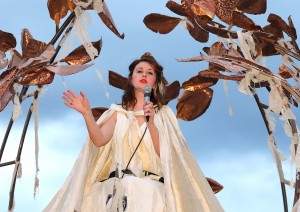 “Who died?”, an elderly lady dragging her shopping bag behind her asked me as I stood waiting for
the start of Morbid & Sons’ world premiere on Broad Street last Friday.
She could be forgiven for assuming the worst, given the amount of onlookers who had respectfully filed in behind the plumed Victorian hearse winding its way from Garter Lane to the city centre, as mournful members of the Morbid family drummed up trade with such enticing offers as ‘Buy Now, Die Later’ and brought a ‘live’ corpse from the audience to assist in a funeral demonstration that included a Rigor Mortis Mambo. Could they dig it? Yes, they could!
The interactive show, the brainchild of Spraoi parade director Nick Kavanagh, was a highlight of last weekend’s festival, which brought over 200 free gigs to the city and featured acts from 10 countries performing alongside a host of home-grown talent.
Nobody in Waterford can precisely pinpoint when the August Bank Holiday weekend became known as ‘Spraoi Weekend’ but Spraoi Director TV Honan believes it was an inevitability.
“This was our 24th festival and I’d say every family in Waterford has had someone volunteer with Spraoi by now. The weekend – especially the parade – is a local institution that the people of Waterford think they own…and they do!”
“When it comes to street theatre, Waterford audiences are amongst the best-educated in the world”, Honan added. “They’ve had 24 years of world-class street acts on their doorsteps and they’ve come to expect the best so that’s what we give them.”
One act which raised more than a few eyebrows last weekend was the slightly-risqué Outside the Box, from Belgian/British outfit Fullstop Acrobatic Theatre.
Following complaints from some audience members on Friday afternoon, Saturday’s performance came with a warning that ‘Some Scenes May be Unsuitable for Young Children’.
The aerial acrobatic show explored traditional gender stereotypes and there were lots of quizzical looks from younger members of the audience – not to mention hot flushes amongst the adults – as the performers described the complexities of the female reproductive system!
The city centre was jam-packed on Sunday night for Waterford The Musical – Spraoi’s own parade – which recreated famous stories in local lore. Bilberry – or was it Passage – goats gyrated to the ‘Hucklepuck’, while imps descended from the ‘fairy road’ in the Comeragh Mountains to wreak chaos; Strongbow and Aoife duetted to the tune of Gilbert O’Sullivan’s ‘It’s Matrimony’ while appealing for a ‘red lead blaa’; a rather rusty-looking Thomas Francis Meagher recruited troops for the US Union army while belting out Val Doonican’s ‘Walk Tall’; silver-basqued starlets were ‘Shaking that Glass’ in a nod to the demised Waterford Crystal and also the city’s Tops of the Town glory years. The crowd reminisced, they laughed and they loved every minute of it.
“We celebrated everything that’s great about Waterford, its images, its landmarks, its legends and intermixed this with famous music from natives”, explained Artistic Director Mike Leahy.
The Spraoi parade is created by a team of professional artists and an ‘army’ of volunteers, Leahy noted.
“The core team of artists have been physically putting the parade together for the past six weeks with help from volunteers of all levels, including the 300 or so performers – aged from around ten to seventy- who brought it to life on the streets.
“Because we’re now 24 years old, we have volunteers who literally grew up through Spraoi. Nick Kavanagh, our director, would have first performed in a parade when he was around 16 years old. This year we also have three generations of the same family – Mickey, Adrian and Gabriel Dower – performing in the parade, that’s pretty unique I’d say.”