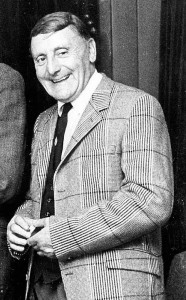 The Munster Express and the late JJ Walsh was the subject of one of the afternoon tea talks at The Parlour Vintage Tearooms in the old Port office on George’s St., Waterford.
This was one of a number of talks given as part of Waterford Civic Trust’s ‘bite size’ talks series entitled “Gone But Not Forgotten”.
Others talks were on the Morris Family, former building owners, James Power 1960/61 City Mayor, the Buddy Man, Port of Waterford and TF Meagher.
There was standing room only as Cllr. Davy Daniels was introduced by Ann Waldron of Waterford Civic Trust and Davy, a lifelong ad exec and employee of The Munster Express, recalled times past with the famous JJ.
He explained how he interacted with staff and how he developed printing and technology on the Quays. Printing is now outsourced which is common as the industry changes.
He told a few funny stories too and how staff who might have had differences would get behind JJ in the end.
His son Kieran gave some family details. He gave a description of life in The Munster Express when the Civil War occurred when The Munster Express was occupied by anti-Treaty forces and how staff, family and armed men got on during the siege in Waterford on 1922.
Buying paper in advance of World War II was one of the great business gambles that worked out and later as the advertising market expanded in the post war era the newspaper could grow in pages and news. Investment in photography and colour were later steps.
His interest in sport, soccer, golf, GAA and the Olympics, was mentioned as was his hard work ethic and his unwillingness to retire.
Visits to Moscow during the Cold War and his attitude to Franco were also noted, as well his admiration of the USA and the emerging new countries in Australia and Asia.
Well done to the Civic Trust, Sarah Jane Hanton and all those who arranged for the event.
See Jenkins Lane for some personality profiles of those spoken about.