The grandeur of Granada

Granada is a charming city situated at the foothills of the Sierra Nevada mountain range in southern Spain. The Alhambra is by far the city’s most famous attraction and, on a visit to the city last October, it was abundantly clear to see why. 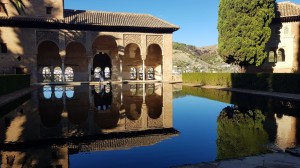 This sprawling hilltop fortress complex encompasses royal palaces, courtyards, terraced gardens, fountains and pools and allows visitors to step back in time to another world.
On arriving in Granada, the Alhambra creates an imposing sight as it appears to majestically rise from the landscape.
For centuries, its location was deemed to be of immense strategic importance with good visibility of the surrounding areas.While I was aware of its popularity and cultural importance, I was certainly not prepared for the sheer size and scale of the Alhambra.There are three parts to the Alhambra: the ornate Nazrid Palaces, the Alcazaba (the battlements) and the Generalife (the gardens).
Famed for its various architectural styles, it was constructed by the Moors, who invaded the country from the 8th century onwards. It wasn’t until the 14th century that the Alhambra as it is known today began to take shape when the palace’s construction was commissioned by the Moorish emir Muhammad I of Granada. It was eventually turned into a royal palace by Yusuf I Sultan of Granada. The Moorish rule subsequently came to an end after the Spanish launched the Christian Reconquista and reclaimed their land.After the conclusion of the Reconquista in 1492, the Alhambra became the Royal Court of Ferdinand and Isabella and was where Christopher Columbus received royal endorsement for his expedition to discover the ‘New World’.

A view of Granada from the Alhambra.

The Alhambra underwent significant refurbishment and restructuring in accordance with the Renaissance style of the time. The structure grew into the large complex of rooms, palaces, courtyards, chambers and gardens that visitors can admire today.
The Alhambra, which today is a UNESCO World Heritage Site, has been the inspiration for countless love songs and stories. While enjoying a guided tour of the location, you can immerse yourself in its grandeur and the many tales of love and loss. Our guide regaled us with many stories from long ago and it was fascinating to hear the reasons why certain buildings within the Alhambra display specific design features.
The Mirador of San Nicolas is perhaps the best option within Granada city for viewing the Alhambra in all its majestic splendour, particularly at sunset.This location also offers panoramic views across the rest of the city, with the impressive backdrop of the Sierra Nevada mountains adding to the overall beauty. Due to demand, it’s advisable to purchase tickets for the Alhambra in advance.
Purchasing a Granada Card (www.en.granadatur.com/granada-card) offers the opportunity to explore all of Granada in a convenient manner. The card provides access to attractions such as the Capilla Real (Royal Chapel) and Catedral de Granada.The card also includes public transport and is certainly a convenient way of getting around the city and admiring and appreciating its many sights. If you feel adventurous, Granada is a great base for exploring the Sierra Nevada mountain range.
With its high peaks, this mountain range is home to one of Europe’s most southernly ski resorts.Many of the tourists visiting Granada arrive as part of day trips from their holiday bases on the coast. A visit to the Alhambra itself is worthy of at least four hours in order to truly appreciate all that it has to offer. However, because of its enduring appeal, you may be compelled to plan another visit to this Granada gem!
For more information on Granada, visit http://en.granadatur.com/

GETTING THERE
Granada is a one hour and thirty-minute drive from Malaga. Both Aer Lingus and Ryanair operate regular direct flights to Malaga from Dublin and Cork.