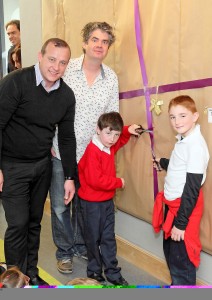 Last January, the young pupils of Gaelscoil na nDéise and Art Hand artist Sean Corcoran embarked on a magical journey to create a mosaic for their new school at Carrickphierish, then under construction.
Their plan to create a ‘Magical Forest’ in their new school took weeks of planning, imagining, drawing and finally creating the mosaic itself, which was painstakingly constructed in the ‘halla’ of their old school building in Grace Dieu. Every child in the school collected treasure and stuck it in the 3-metre mosaic during its construction.
Over the summer months, the Magical Forest and all its enchanted creatures made their way to Gaelscoil na nDéise’s new permanent home. But the artwork was kept under wraps until last Thursday, when pupils Jack O’Connail and pupils Ethan O’Deoráin, both of whom celebrated their birthdays that day, were chosen to unveil it.
Sean is currently working on Part 2 of the Magical Forest project, the creation of a book containing many of the stories and drawings compiled by the children during the design phase. Each child is to be presented with a copy of this keepsake, while the book will also be available in the school’s neighbouring branch of Waterford Library when it opens next year.
To mark their arrival on the Carrickphierish Road, pupils also buried a time capsule on the school grounds last Thursday. It contains photographs of every class in the school, as well as toys, artwork, newspapers (including a copy of The Munster Express!) and stories written by a number of children in both Irish and English entitled ‘What I’ll Be When I’m Big’. School principal Marc de Grás said the time capsule will stay buried until 2036, by which time the youngest children in the school will be aged 25 and the eldest will be 33 years old.