Home » Entertainment » Film » Down the Town 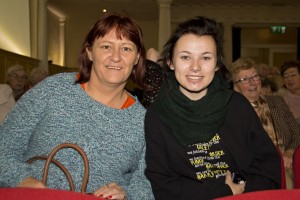 There was a wonderful atmosphere in St Patrick’s Gateway where Waterford Youth Arts screened their third film in the local history of Waterford series, Down the Town. Mostly, it was the salt of the town, the ordinary people, not sociologists or academics, but Waterford people sharing memories; some sad but others had a beautiful unforced humour and a gentle sting in the tale. Funded by Waterford City and County Council, this one was under two hours and added much to the first two, Barrack Street and Ballybricken. Down The Town has a specific meaning for many and it touched on streets, places, the docks, the Glass, the Theatre Royal, The Olympia Ballroom, Primary Schools, showbands, Clyde Shipping and The Portlairge (The Mud Boat).
It has become obvious that this is only the start of a valuable oral and recorded history of Waterford as it was and how that diverse past shaped our present. As Ollie Breslin, the producer, said it was “only scratching the surface”. I liked the editing technique that distilled 35 hours of footage to an absorbing and fascinating flick through of memories, without names, credits or details. This was filmed narrative that made it look easy. It started by describing the smells of the place, with the Comerford Brothers singing Teach Your Children, as Paul Clancy described swimming in John’s Pill, as “we didn’t know any better”. Patsy Sheridan brought Jenkins Lane back to life with stories of free shoes and Newfoundlanders returning to Waterford to have their children baptised.
Des Griffin described the castles and walls of Waterford and Doherty the Fishmonger reminiscing while cutting and gutting fish was memorable. Tommy Deegan added to the history at Kiely’s Brewery and Tony Fitzgerald told about TB and the need for a warm and heavy topcoat. A scout leader spoke of pipe bands and dances, where priests were against close-dancing – “Keep a respectable distance for the Holy Spirit”.
Larry Hogan spoke of playing cards for ‘teetees’ (bottle caps) and two women from Carrigeen Park delighted with rhymes, street songs and ball games against the wall. The game of ‘knucks’ was ‘explained’. Local cinemas were fondly remembered, as were bullseyes (boiled sweets) – “They’re hard, but you got them soft”. Andy Jordan recreated the world of Miss Kerr and the Sherriff Kelly at The Col and Frank O’Donoghue remembered the Tramore train that, in its heyday, carried 400.000 passengers in a season.
Sean Power spoke about the Penny Bank and messenger boys bikes were remembered (Boy wanted, to be as strong as a man, to push a bike as big as a horse). Tom ‘The Liar’ O’Sullivan was remembered with great mirth from John Aylward and the Golden Age of Tops of the Town was illustrated with images of Joe Barrett, Tom Skelton, Odran Fitzgerald and David Kelly standing in Flaggy Lane and Bryan Flynn on the stage as Chaplin. Pat McEvoy appeared in a Les Miserables scene and John O’Connor recreated a world of showbands as Des Manahan tickled the ivories as the memories faded.
Keith Currams directed and operated the camera, assisted by Michael O’Gorman, with Bridget Greenslade on audio and research.