Much was expected of Jim Nolan’s – The Red Iron – a play for Waterford, and mingling on the opening night at Garter Lane was a proud feeling as the great and good, the dreamers, the schemers, the shapers, the bright lighters, sipped Blackwater Gin and listened to the Barrack St Concert Band.The lights dimmed, and the New Order’s ‘Blue Monday’ set an Eighties angsty memory in motion, as a group of friends gathered on the derelict Red Iron bridge, to remember one of the gang, Sinner, who was buried earlier that day.

The same September day, 2017, that the defeated All-Ireland, Waterford hurling team returned for a Quayside reception, with their ‘heads hanging’ and their ‘hands empty’. The rusty railings were festooned with Waterford jerseys, flags and bunting.The humour was sharp and salty – “whinger”; “fucken knacker”; “too mane”; bolliky Whelan”; “oil tanker me hole”; “shag, shit and shave” and “black and amber muck savages”. References to ‘Doc Fitzes’; ‘Jim Beglin’; ‘Liz Reddy’ evokes familiar laughter, and it was such a buzz to hear a litany of Waterford street names and locations being listed off. It was almost hypnotic. 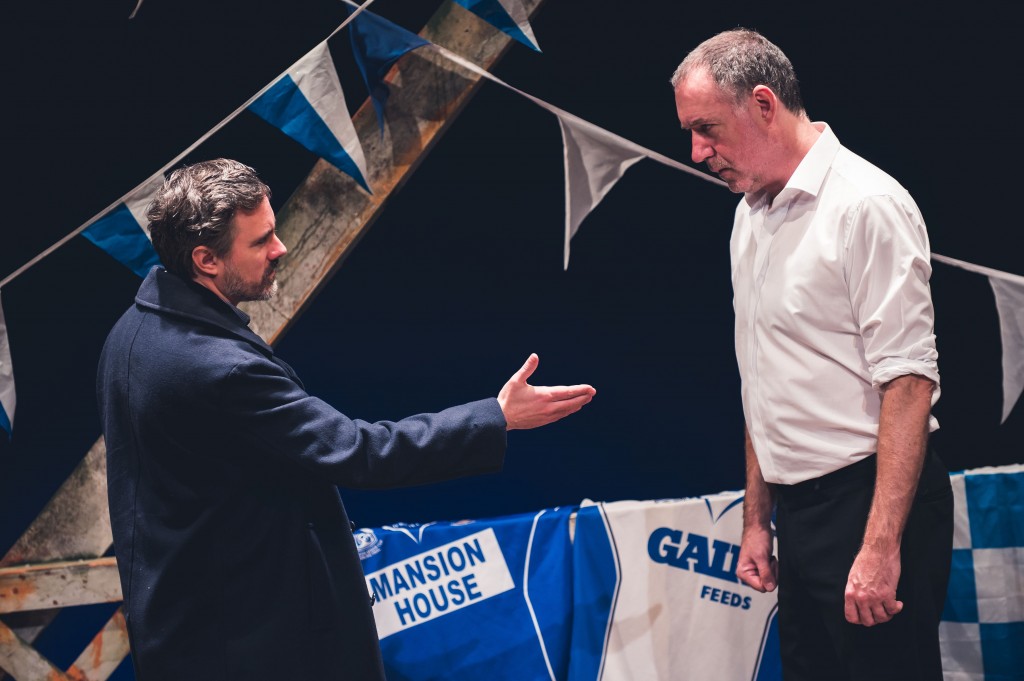 The organiser-in-chief, Dog (a towering performance from Brian Doherty) said what they were doing was a gesture “the least we could do for the poor fucker” who did “more for Cnoc Sion than Edmund Rice”.
Dog was the lightning rod, the provider of music, drink, the promiser of All-Ireland tickets, and he epitomised the pervading sense of failure, of lost chances, the road not taken, and it emerged as to why he could not carry the coffin. Was it grief or guilt? The play explored that dilemma in some of the most powerful, visceral and emotive passages of drama as the easy laughter turned sour, and the recriminations fell like tears as reminiscences exposed things better forgotten, but once you open the vein of the past, the heart will exsanguinate.

Great drama is often uncomfortable, and the revelations and discoveries conflicted many in the audience, who wanted to take sides. There was Zorro (languidly created by Keith Dunphy who was as laid back on weed, as a railway track). There was Michael Quinlan’s self-pitying, truth-denying, Scabs, whose anger and petulance fuelled the sense of defeat and hopelessness.Jenni Ledwell was Charley, the opera singer, who buried her husband in the rain in Wales, and came home to sing at the funeral. Greta Rochford was salt of the earth as the sparky, Dettsie, who felt “a pizza from Aldi” was good enough from her posh husband.

The Act 2 arrival of Kel (Neil Ditt) who had gone to England, played in a military band, and lost touch, was a shock and he accelerated the savage revelations. This reminded me of The Kings Of The Kilburn High Road with the singing of a rousing Mount Sion hurling song. No longer was it the small things that make a life… a set of memories that evoked the potency and delusion of memory.Jim Nolan directed like a man inspired, as he revived the Red Kettle Theatre Company, but that is another story of recrimination and failed hopes.

Michael Grant and Padraig O’Griofa produced with business-like style and are carving out a strong position for themselves in theatre and entertainment.The standing ovation was instant, thunderous and an outpouring of local pride, so well deserved.