Home » Entertainment » The Sweet and Lowdown

The Sweet and Lowdown 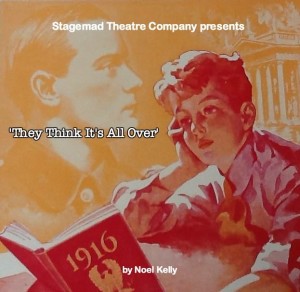 They Think It’s All Over, the latest offering from Stagemad Theatre Company, runs at both Central Arts in the city and Dungarvan Town Hall Theatre in the coming weeks.
Written by local playwright Noel Kelly and directed by James Power, the play is part of Waterford Council’s 1916 Centenary Events. They Think It’s All Over is set in Waterford of 1966, with the country enjoying its first economic boom. Living standards are improving, employment is on the rise, the country has its own national television service, showbands are entertaining the masses and the Sixties have really started to swing! Waterford is a city buzzing, surrounded by new housing estates and street corners full of restless youths. With talks on the North, it seems like only a matter of time before the country is reunited and, as Easter draws near, plans are in place to commemorate the 50th anniversary of the Rising.
The one-man show features Waterford actor Jamie Flynn playing the role of James Ryan, a Leaving Cert student at a city school whose future is marred with conflict, he says. 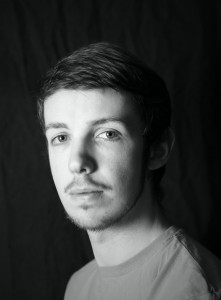 Jamie Flynn, who plays James Ryan in Stagemad’s They Think It’s All Over.

“The only thing James wants to do is play soccer for Manchester United. But there’s a ban on foreign games, his school plays nothing but GAA, under the direction of a Christian Brother named Br Dorgan. So James has this big conflict going on about his future. At the same time, Br Dorgan is putting on a pageant to commemorate 1916, in which James is playing Padraig Pearse. So at this time when his future is unclear, he’s thinking about the principles of 1916 and whether or not they’re being upheld.
“The play will really resonate with Waterford audiences of a certain age, particularly for anyone who attended Mount Sion, even though it’s not named as the school.
“The school motto is mentioned in the script but there are also references to the physical layout of the school that past pupils will recognise straight away, like the big steps leading up to the hall, or the big and small yard. You don’t need much imagination to work out what the writer meant.”
Jamie has been acting locally since he was 15, having started out with Waterford Youth Arts. He’s now a student of Theatre Studies and English on the BA programme at WIT.
“I spent three years with Youth Arts doing the weekly workshops and summer plays with professional directors such as The Key of D with director Scott Johnston and Dark of the Moon with Jim Nolan. I’ve also performed with Spraoi and the Imagine Festival over the years. 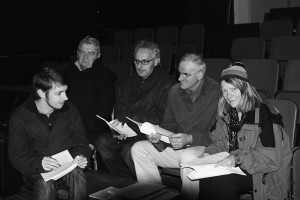 In rehearsal with the cast and crew.

“In 2010, after finishing the Leaving Cert in Mount Sion, I moved to Dublin for a Theatre Studies course in Coláiste Dhulaigh College of Further Education and I also performed with Dry Ice Theatre Company up there.
“When I came home to Waterford I worked with a couple of other directors and theatre companies. The last time I performed in Central Arts was in James’ Rockett’s play Boxer, put on by Loose Screw Theatre Company and the most recent shows I’ve been in were Jim Nolan’s Blackwater Angel and again with Jim directing the Waterford Youth Arts summer show Our Town.
“I’m also in my second year of the BA programme in WIT and I’m loving it. There is a lot of theory involved so it’s nice to be involved with productions outside college.”
• They Think It’s All Over runs at Central Arts, 18th to 20th March and then travels to Dungarvan Town Hall on 9th and 10th April.