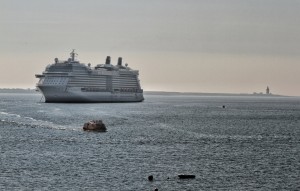 Antohny Brophy reports:
The first cruise ship of the season, Serenissima, arrived in Waterford on May 12th, on a garden cruise. She had come via the Scilly Isles and Glengarriff and then sailed from here to Penzance, Cornwall.
Mount Congreve was the main feature at Waterford and no doubt the early evening sail down river in glorious sunshine also left passengers and crew with a splendid impression of the city and surrounds.
Serenissima is a hardy vessel, built in 1960 as the Harald Jarl for the magnificent Norwegian Coastal Voyage, perhaps the finest cruise experience of all, where the daily service from Bergen up to and beyond the North Cape is served by about a dozen ships.
Now Serenissima sails as an expedition-style cruise ship (100 passengers) and is due back in Waterford next year.
Another hardy sprite on view will be Sea Explorer which will grace the City three times this year with two close calls on June 4th and 9th.
While Serenissima is the smallest of the 16 listed cruise callers per Port of Waterford
Company website she was succeeded on Monday of this week by the largest, Celebrity Silhouette
with 2,850 passengers and 1,500 crew.
At 122,000 tonnes and a whopping 317 metres long she anchored off Dunmore being well beyond up-river limits. Celebrity had two calls last year but sadly none are scheduled for 2017.
The city will host five calls, two will dock at Belview and nine shall drop anchor off Dunmore. July 19th offers two ships; Swan Hellenic’s Minerva (City), and Azamara Quest (Dunmore).
It’s good to see the small German company, Phoenix, return to Waterford after some years absence with a visit from Deutschland on a summer charter to the company.
Although it won’t be until next year, another returning and very welcome past pupil will be Holland America’s (HAL) Prinsendam, formerly the Royal Viking Sun which made her debut call here was in 1990. HAL had been good supporters of Waterford in the past with numerous annual calls.
Crystal Cruises maintain very close association with Waterford for obvious reasons and Crystal Symphony calls on July 26th.
The ownership of Crystal changed recently and new owners, Genting of Hong Kong, have announced an extensive new build programme including aircraft for air cruises! Waterford Crystal is a powerful calling card especially for US based cruise lines and matching facilities with the appeal of this brand will bring enhanced reward.
The classy modern sailing ship Wind Surf comes twice (Dunmore) as does the Nautica, splitting her calls between Dunmore and Belview.
It’s heartening to note that at Serenissima’s arrival Harbour Master, Captain Darren Doyle, announced that the port is working hard to attract further cruise calls.
Cruise ships are not a bread-and-butter sector for ports but most ports vigorously embrace the pride and prestige which the sector brings to a city, port and region.
On the wider scene Dublin looks forward to 113 cruise calls this year, Belfast has overtaken Cork for the second spot and watch Killybegs counting 14 calls, just behind Waterford, with all ships berthing alongside its fine deep-water fishery pier.