The Vikings Are Coming!

This Easter Bank Holiday Weekend, running from March 31st to April 2nd, the Waterford Museum of Treasures will transform the city with a new touristic spectacular through ‘Vadrarfjodr: The Viking Festival’.
Waterford Museum of Treasures, together with the support of Fáilte Ireland, Waterford City & County Council and the EU Creative Europe Programme has invested over €300,000 to host this weekend of Viking themed family friendly events, across the city centre 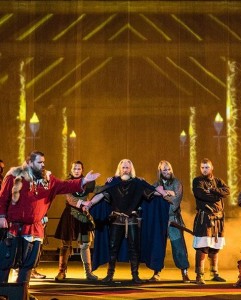 Vadrarfjordr is a new festival which will run in Waterford over the Easter Bank Holiday Weekend.

The city’s streets will be swarmed with fantastic street performers such as jugglers, fire-eaters and costumed characters, while interactive events including storytelling with Norwegian Vikings and Viking Bow and Arrow Making from Scottish Vikings on the set list.
The ‘Deise Medieval Gang’, a group of Waterford re-enactors, will build a life-size ‘Viking Village’ in Cathedral Square, and a ‘Viking Shield Wall Battle’ will convert the Peoples Park into a veritable Viking battleground.
The festival will culminate on Bank Holiday Monday, April 2nd with a 45-minute theatrical extravaganza at the Apple Market.

Here, a host of Vikings from Norway, Sweden and Denmark will wow Waterford crowds with a dramatic reproduction, all set against an enormous cinema screen erected in the pedestrian centre.
Director of Waterford Treasures, Eamonn McEneaney is very pleased to bring the Vadrarfjodr line-up to Waterford residents and visitors.

“It’s the right kind of festival to kick-start the spring/summer tourist season and use our colourful history to inject some magic into the city,” he stated.
The majority of events at Vadrarfjodr will be free of charge and outdoor food and beverage stalls will dot the festival routes too.

The festival programme will soon be live on www.waterfordtresures.com as well as www.failteireland.ie so prepare for a thrilling Easter Weekend!