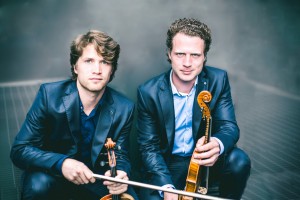 Following their hugely successful debut Irish tour, Violin maestro Vladimir is once again delighted to share the stage with his equally gifted younger brother Anton at the Theatre Royal on Saturday, 17th October.
Two Brothers celebrates popular classical music by the great composers, where Vladimir and Anton highlight pieces from their Russian heritage mixed with well-known favourites from the stage and screen.
During the last ten years, Vladimir Jablokov has established himself as one of the brightest young stars on the Irish classical scene, with concerts and recordings that show his love of both Viennese music and contemporary pop / crossover.
Completing the gifted trio for these concerts will be pianist Adam Kuruc, Vladimir’s longtime arranger and co-producer. Hear pieces such as, ‘If I were a Rich Man’, ‘Sunrise Sunset’, ‘Dark Is The Night’, ‘Kalinka’ and ‘Those Were The Days’ as well as well-known themes from Dr Zhivago, The Godfather, Scent of a Woman and other cinema favourites