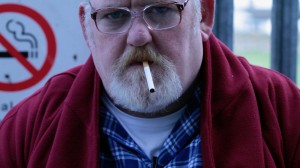 Alan Flynn in a scene from The empty chair…

The empty chair… is a short film written, directed and acted in by six men
drawn from the Belong Club in Waterford who attended a drama class run by WWETB (Waterford & Wexford Education & Training Board). The club is supported by Acquired Brain Injury Ireland (ABI), which has been providing services to people in Waterford with an acquired brain injury since 2005.
The men developed drama skills and were then supported to devise a story by artist Philip Cullen. Each member contributed to the script overall, but primarily in the creation of their own character.
Written in the natural voices of the men upon a theme of their own choosing, the issues-based script raises questions around homosexuality in a heterosexual group, bigotry, alcoholism, love and bereavement. It is set in a medical institution and graveyard.
The empty chair… is due to be premiered during the Imagine Arts Festival in Waterford on 16th October in St Patrick’s church, Patrick Street at 8 pm. It will also be shown at a conference in University College Cork in November entitled Critical Perspectives On and Beyond the Therapy Industry.
After each screening a panel comprised of the actors Alan Flynn, Richie McGuire, Steve Bond, Owen Griffin and Victor Burke, Helen Rafferty (WWETB) and artist Philip Cullen will engage in a facilitated questions and answers session with the audience. ETB facilitator Sarah Bates will act as moderator to field questions between the actors, artist, funders and the audience.
The project was co-ordinated, filmed and facilitated by artist Philip Cullen.
Philip uses art as a developmental tool for a wide variety of groups as well as managing a professional arts career which includes public sculptures and solo multimedia exhibitions.
The actors are keen to reach out to others through creativity, to express and share the common struggles we all experience in one way or the other and to enjoy their ability to contribute to, shape and participate in the cultural life of Ireland.
The film is shot completely in Waterford. It is provocative, full of drama, enjoyable, funny and at times very sad and shocking. Members of the public interested in attending the premiere are welcome on a first come first served basis.