Home » Sports » GAA Hurling » A Game for the Ages

A Game for the Ages

Dermot Keyes revisits the events of July 8th last, when Waterford ended a 58-year Championship hoodoo, outgunning Kilkenny by 4-23 to 2-22 in a rip-roaring All-Ireland Qualifier at Semple Stadium…
Derek McGrath has often referred to the gladiatorial battle that Championship Hurling provides, and how right he was when it came to this heavyweight hurling contest in the game’s most loved cathedral.
Were we not entertained? By God we were, and even those cars that made for home with divided loyalties must have radiated with the energy generated by this latest titanic battle between neighbours whose rivalry now truly matches those great encounters of the late 50s and early 60s.
Waterford dug brilliantly deep, but they’ll need to go to the well a few more times yet to embolden the legend of a victory almost six decades in delivery. 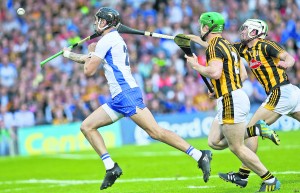 Liam MacCarthy is now a 59-year itch in the scratching, but this victory will always remain a significant result in the history of the county: a black and amber gorilla, let alone a monkey, has been peeled off our backs.
A first half that didn’t exactly catch fire by any means was still one in which Waterford had much the better of the overall play, and at the break they were good value for their 1-10 to 1-5 advantage.
Frees from Pauric Mahony had the Deisemen two points up inside five minutes before Richie Hogan registered his first and only point of the evening. Jake Dillon assisted skipper Kevin Moran for Waterford’s third point after eight minutes before TJ Reid opened his account for the night with an 11th minute free following a foul on Cats captain Paddy Deegan. Mahony landed a 65 in the 13th minutes and converted another free on the quarter hour mark as Waterford began to settle into the action.
Mahony steered another free between the posts five minutes later after Michael Walsh’s progress, catalysed by a superb Shane Bennett flick, had been illegally stymied. Waterford were winning a lot of the ‘dirty’ ball via rucks, while Darragh Fives was superbly disrupting the aerial threat of Walter Walsh under the high ball.
TJ Reid recalibrated the radar via a 24th minute free, having sent a 65 and a free wide only minutes previously as Kilkenny struggled for rhythm. Austin Gleeson, demonstrating the form that earned him the Hurler of the Year awards, landed a superb 27th minute point from deep on the right flank, with Jake Dillon sending the white flag upward barely a minute later.
Kilkenny goalkeeper Eoin Murphy vacated ‘the sticks’ to land a fine free over the bar on the half hour before Mahony again found his range to restore Waterford’s five-point advantage. Yet just when one felt Waterford might press decisively on before the break, Kilkenny were awarded a penalty after Richie Hogan was brought down just yards from Stephen O’Keeffe’s goalmouth. TJ Reid, the best penalty taker in the country, zipped the ball past the diving O’Keeffe to haul the Cats back into the contest. 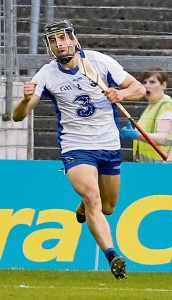 All-Star Jamie Barron wheels away following his goal in the first period of extra-time in Thurles.

As the half trickled into additional time, Austin Gleeson produced a second magnificent point to rouse those Deise fans among an attendance of 33,181. Kevin Kelly replied in kind for Kilkenny from their next attack, but Waterford’s superiority merited a greater advantage at the break, and they got that through a Michael Walsh goal, who shot home from point-blank range following Shane Bennett’s pass.
On the resumption, a fired-up Kilkenny found some early rhythm, but only registered three points during the opening 10 minutes through substitute Lester Ryan, TJ Reid (via Hawkeye) and the advancing Conor Fogarty.
Jamie Barron, full of industry once more, opened Waterford’s second half account with a 47th minute point, before Gleeson marked this encounter with another sumptuous point, sending TJ Reid the wrong way before rifling the ball over from halfway. Reid’s 53rd minute free reduced Kilkenny’s arrears to four, before Waterford produced what most felt, by then at least, the decisive score of the night.
Disrupting an attempted clearance, Michael Walsh fed Shane Bennett, who finished brilliantly, firing the ball into the extremity of the top left hand corner of the Killinan End netting.
A minute later, Kevin Moran extended Waterford’s lead, by which time Kilkenny had still only scored five times from open play. And when Hawkeye awarded Austin Gleeson another point in the 58th minute, Waterford were 2-15 to 1-10 clear. But then, as if someone clicked a switch, Kilkenny ignited. Lester Ryan added another point on the hour before Reid converted a 64th minute free.
Two minutes later, Reid scooped the ball over the line from two inches and suddenly it looked like Waterford’s sky might fall in. Aylward, Leahy and Colin Fennelly, assisted by brother Michael, landed the points which drew the sides disbelievingly level from a Waterford perspective, leaving the white and blue support with a distinct sense of déjà vu. In the fourth and final minute of additional time, substitute Maurice Shanahan, underneath the lip of the Kinane Stand, had a chance to win the match via an at the death free. But the ball flew to the left of Eoin Murphy’s left upright- and extra-time beckoned. Again. And by then it was difficult not to avoid thinking that the force was with Kilkenny.
And in hindsight, while one could reflect on Waterford not landing a score over the closing 16 minutes, they didn’t work the scoreboard in the opening 12 minutes of the half either, which will not have gone unnoticed by management. The outstanding Jamie Barron got Waterford off to the ideal start a minute into extra-time, with the impressive Lester Ryan replying from Kilkenny’s next attack of note. TJ Reid then sent the Cats ahead with another free, the only time they led the entire match but Waterford responded with near immediacy through a looped effort by substitute Patrick Curran. Barron, by then coming into his own, struck a 77th minute point only for Reid to level matters from another dead ball just moments later.
But on the stroke of this match’s second half-time, so to speak, Waterford goaled for a third time, as Jamie Barron, sent on his way by an excellent Austin Gleeson pass, darted 40 yards goalward to rifle the ball beneath Eoin Murphy. At the change of ends, Waterford led by 3-19 to 2-18.TJ Reid was first to score in the second period from another placed ball, but two minutes later, Waterford struck for home, as Maurice Shanahan latched onto a loose ball to coolly bat the sliothar into the Kilkenny net.
The Lismore man wheeled away in triumph, grasping his crest in a manner we’d not seen for a few years from any Deiseman. The finish line was in sight.
Reid turned over an 84th minute free before Colin Dunford sent fellow substitute Tommy Ryan on his way for Waterford’s 20th point of the night. Richie Leahy reduced Kilkenny’s arrears to five points with three minutes of normal time remaining only for Shanahan to reply in kind with a free almost immediately.
Reid landed his 10th free of the night (adjudicated by Hawkeye) before we were told there’d be another three minutes of play. And in added time of extra-time, Maurice Shanahan (another free) and Tommy Ryan planted a cherry on top for Port Láirge. After 58 years, Waterford had finally beaten Kilkenny in the Senior Hurling Championship. 4-23 to 2-22. And what a joy it was to witness it.