The best 35 minutes produced under Tom McGlinchey’s watch on away turf saw Waterford trail Laois by a single point as the sides went in for some welcome respite from the Saturday night chill in Portlaoise.
But a dominant second half display, which included a run of six successive scores, coupled with the return of the classy Donie Kingston, ensured Laois remain on course for an instant return to Division Three.
Have we had our fill of moral victories? Well, you could put an air to that query and sing it, but this was simply a case of Waterford playing well and Laois playing that little bit better, particularly during the “Championship minutes”.
And in so doing, the hosts condemned Waterford to another season of Division Four football. A great big knot in aiding the development of football in the county awaits untangling.
Waterford took the lead after 62 seconds through the recalled Hutchinson, following a move instigated by captain Paul Whyte, once again deployed in a marauding, rangy role.
Rathgormack’s Conor Murray, who linked up so well with clubmate Jason Curry ahead of him and fellow half-forward Kieran Power (making his first senior start), played in Hutchinson for his second point come the third minute. 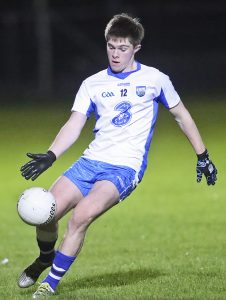 Conor Murray was a dynamic presence in the Deise attack at Portlaoise on Saturday last, particularly during the first half of an entertaining contest. | Photos: Sean Byrne

Laois got off the mark after full-forward Gary ‘Psycho’ Walsh converted a free, following full-back Thomas O’Gorman’s concession (O’Gorman was dismissed in the closing stages for a second bookable offence). With good point scoring opportunities missed by both JJ Hutchinson and Tommy Prendergast, Laois drew level through Alan Farrell in the 10th minute and took the lead through Walsh’s second free two minutes later.
The concession of frees, particularly the position from which Waterford gave them up, provided Tom McGlinchey with food for thought afterwards, as the hosts converted nine set pieces, eight from the boot of Walsh and a single by veteran corner-forward Ross Munnelly.
A half-chance fell Kieran Power’s way following indecision between Laois goalkeeper Graham Brody and his new look full-back line, but again Waterford failed to plunder from a positive position. Sixty seconds later, the energetic Power delivered a hanging ball towards the square, which JJ Hutchinson deftly fisted over the bar.
And barely a minute later, the Deise produced their stand-out moment of the night in what was the first meeting of the sides since 2002. Conor Murray, darting crossfield, from the left-flank pocket, only yards from the corner flag, delivered a superb looped pass into the patch of JJ Hutchison, who darted inside full-back Shane Nerney and found the net from point-blank range to send Waterford 1-3 to 0-3 clear. Gary Walsh landed another free in the 20th minute and the sides were level within three minutes thanks to further Laois points from Paul Kingston and Kieran Lillis.
And while there were periods in the first half when just five players were left in the Laois half, this was nonetheless entertaining stuff, and a definite leap forward in performance terms from Waterford in contrast to the previous two run-outs. Jason Curry judged the cross-field wind well when pointing a 28th minute free but two late points from Gary Walsh and Ross Munnelly sent the hosts in a point ahead.
Waterford were first off the mark after the restart following a fine Kieran Power point in the 37th minute, having been played in by a superb Tommy Prendergast punt pass. Gary Walsh replied for Laois within a minute, with Munnelly turning over a free 90 seconds later to send John Sugrue’s side two points clear. But Waterford refused to buckle, with Jason Curry turning over a brace of points in the 42nd and 44th minutes to restore parity. 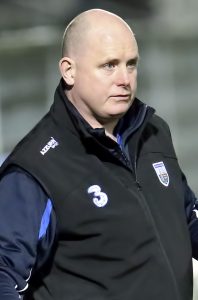 Walsh scored from another free in the 46th minute and still managed to steer the ball over the bar three minutes later despite an unbalancing jersey tug from Ray O’Ceallaigh. Conor Murray kept Waterford well in the hunt when finishing off an excellent 54th minute passing move but the home crowd were on their feet when Donie Kingston turned over a superb score from deep down the right flank.
Gary Walsh’s sixth free (in the 57th minute) put Laois three clear and firmly in the box seat, and he was on the mark again two minutes later after a goal-bound Kingston was taken down by Thomas O’Gorman. As both managers began to empty their benches, Kieran Lillis and Kingston tagged on further white flaggers in the 60th and 66th minutes.
While victory was now beyond Waterford, they never threw the towel in, with substitute Donie Breathnach sending a point high and true between the uprights (68 mins) before Jason Curry recorded his third free from a dead ball, and his fourth in total (69). The dismissals of Tommy Prendergast (Black Card) and Thomas O’Gorman (for two yellows) in the closing 10 minutes will not have pleased management, meaning Waterford finished down a man for the second successive weekend.
Nonetheless, despite the natural disappointment with the result, this was an encouraging performance from Waterford, who will host high-flying Carlow on Saturday week, February 24th.
Postscript: Credit to Laois County Board for producing a fine 28-page programme for Saturday night’s game which was well supported by local companies and contained plenty of interesting match related titbits, including a Laois/Waterford Trivia page which revealed that there has never been a goalless game between the sides, along with the fact that Laois have never lost to Waterford when they’ve led at half-time. Both facts remain intact following Saturday last.