Home » Sports » Soccer » Hibernians Stretch their Lead to the Top

Hibernians Stretch their Lead to the Top

Hibernians 2 Tramore 0
Hibernians stretched their lead at the top of the table following victory over Tramore in Mitchel Kennedy Park on Sunday last. The game was in doubt at the 11.00am kick-off time due to a heavy downpour of snow which made it impossible to see the lines on the pitch but thankfully it stopped and after a short delay the match got underway. 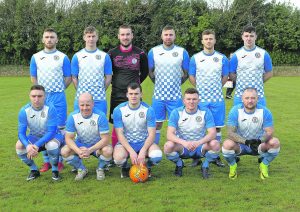 Hibernians went into the game on a total of 24 points compared to the 21 points of Tramore who were in third position. Second placed Ferrybank (22 points) did not play at the weekend as their scheduled outing against Carrick United was called off five minutes before kick-off on Saturday night.
Hibernians opened up brightly and went close after two minutes when Kenny Purcell’s shot from a Conor Whittle free kick went over the bar.
Mark O’Keeffe then cut in from the left but his shot on the run was saved at the near post by Craig Dunphy.
O’Keeffe however found the target on 11 minutes when he hammered a Conor Whittle pass to the roof of the net from 25 yards.The visitors came into the game after that strike and Niall Kennedy had an opportunity to level matters after 24 minutes when he was put clear by Jack Maher but he shot straight at the Hibs goalkeeper Sean Whitty inside the six yards box. 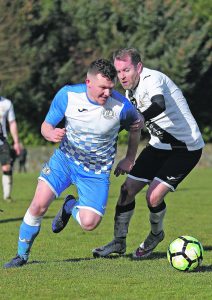 The hosts went close to doubling their advantage seven minutes into the second half when Jason Keane met a cross from Kenny Purcell but his powerful header was hacked off the line by defender Leigh Quilty.
Conor Whittle began to take control in the middle of the park for Hibernians at this stage and he set up Kenny Purcell on 68 minutes but the usual deadly Purcell lost his footing in front of goal.
It was only a matter of time before the home side scored a second goal and it was that man Mark O’Keeffe who did the business on 70 minutes.
Kenny Purcell was allowed too much space out on the right and when he played the ball into the six yards box, O’Keeffe was perfectly placed to touch the ball past the helpless Craig Dunphy.
Three minutes later O’Keeffe almost completed his hat-trick but his fierce shot was turned around the post by Craig Dunphy.Jason Keane tried his luck with a cheeky effort from distance shortly afterwards but the ball dipped over the crossbar.
Next up for Hibernians is a trip to Tom Drohan Park to play a Carrick United team who have a total of 20 points but they have three games in hand of Hibs. Sunday’s match could prove vital in what is the most exciting league chase for many seasons