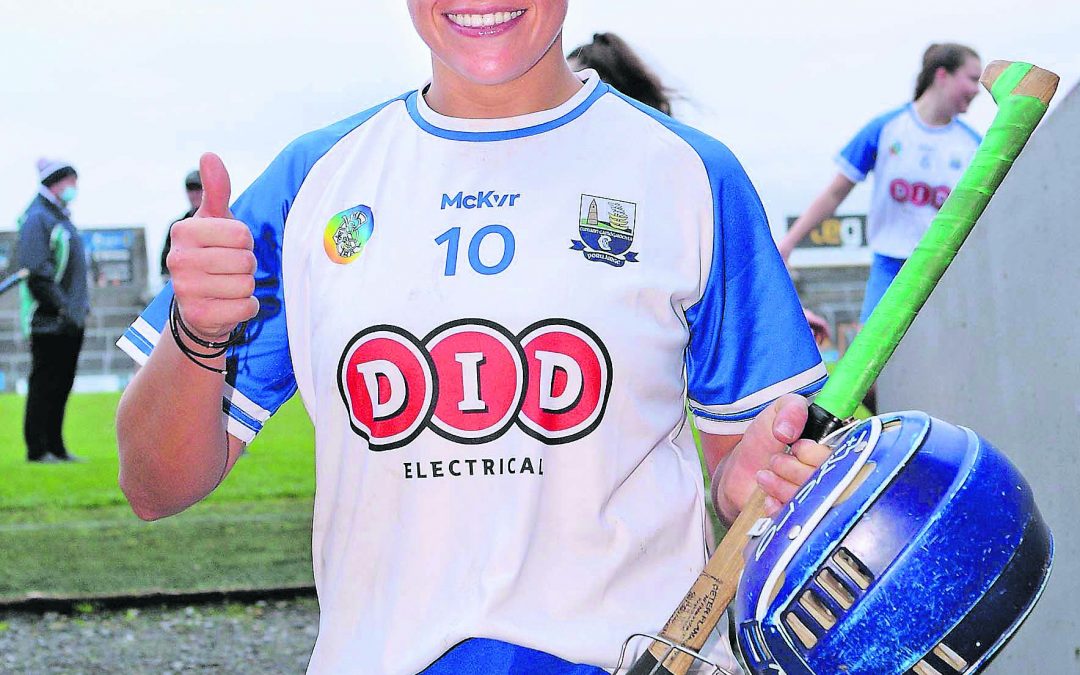 Waterford reach knockout stages for third year running
Waterford 2-17
Westmeath 0-10
Thomas Keane
Waterford recorded a resounding 13-point win over Westmeath at Mullingar on Sunday afternoon last to reach the knockout stages of the All-Ireland Senior Camogie Championship for the third year in a row. Waterford will now face Tipperary, for the second time in three years, on Saturday afternoon at Pairc Ui Chaoimh.
Fergal O’Brien’s charges travelled to the Midlands knowing that they would be making the trip to Cork next weekend if they avoided defeat against a side that had shocked Limerick in the opening round of games.
Waterford were by some distance the better of the two sides for much of this game and after recording back to back wins in the championship they will go into this weekend’s game a confident side.
Beth Carton shot a hugely impressive 1-14 for Waterford, 1-4 of which came from open play while there was also very solid displays from Lorraine Bray, Sibheal Harney, Claire Whyte, Iona Heffernan, Kate Lynch, Orla Hickey and Shona Curran.
Meanwhile Brianna O’Regan, who is without doubt one of the finest goalkeepers in the game over the past few years, brilliantly saved a Megan Dowdall penalty on 53 minutes after she was fouled possibly just outside the box but managed to fall inside the box.
In a very start stop game, the type of game you can expect with Eamonn Cassidy refereeing, Waterford looked to be in a very good position at the break as they went in leading 0-10 to 0-3.
Westmeath improved in the second half and had cut the Waterford lead to four points by the second-half water break.
Waterford upped their game again in the closing stages and goals from Beth Carton and Niamh Rockett saw Waterford run out comfortable winners.
Lorraine Bray, who is once again having a very impressive year in the Waterford colours, opened the scoring on three minutes with a delightful point.
Three Beth Carton scores followed, two from frees before Pamela Greville opened the home sides account on 13 minutes with a free.
Three more Beth Carton scores, all from placed balls, followed for Fergal O’Brien’s side before Pamela Greville hit Westmeath’s second score on 26 minutes.
Two further scores from Carton followed for Waterford before Megan Dowdall split the posts for Westmeath for their first score from open play.
Annie Fitzgerald opened the second half scoring for Waterford inside sixty seconds of the restart, but Westmeath soon enjoyed their best patch of the game.
Pamela Greville cancelled out Fitzgerald’s effort when she put over a free, and while Beth Carton scored the next two points, Greville and Dowdall hit back to cut the Waterford lead to five points. Pamela Greville put over a difficult free on 45 minutes and suddenly Westmeath were in with a chance of pulling off another big result.
However, Waterford upped the tempo in the last quarter and hit their first goal on 48 minutes. Abby Flynn played Beth Carton into space and she fired past Fiona Keating putting Waterford 1-12 to 0-8 in front.
The De La Salle player edged Waterford further in front before her club mate put Waterford nine points up with ten minutes to play.
On 52 minutes a Beth Carton free fell short. As the ball dropped Fiona Keating fumbled but she managed to clear the danger before the advancing Niamh Rockett got a touch.
Seconds later Westmeath were awarded a penalty. They can be no disputing that Megan Dowdall was fouled but it appeared to have happened just outside the box, but her momentum took her inside it and she went to ground.
Referee Eamon Cassidy indicated for a penalty. New rules in camogie mean that such strikes are one on one just as in hurling, but Waterford’s Brianna O’Regan showed her class in brilliantly saving from the Clonkill club player who struck from 21 metres.
Greville and Carton swapped scores from placed balls before Greville pointed again from a free on the hour mark.
Waterford were not finished yet and in added time Beth Carton shot over her shoulder from out near the sideline finding Niamh Rockett who despite the best efforts of Aoife Cully fired Waterford’s second goal of the game.
Two more Beth Carton scores, one from play and one from a free ensured that Waterford would be in the hat for the quarter final draws.
Waterford: Brianna O’Regan, Sibheal Harney, Iona Heffernan, Claire Whyte; Lorraine Bray, Clodagh Carroll, Kate Lynch; Orla Hickey, Shona Curran; Niamh Rockett, Caoimhe McGrath, Jenny McCarthy; Beth Carton, Abby Flynn, Annie Fitzgerald.
Subs: Sarah Lacey for Jenny McCarthy, Aoife Landers for Caoimhe McGrath, Keeley Corbett Barry for Orla Hickey, Anne Corcoran for Annie Fitzgerald.
Scorers: Beth Carton (1-14, 0-10f), Niamh Rockett (1-0), Lorraine Bray, Annie Fitzgerald, Abby Flynn (0-1 each).
Westmeath: Fiona Keating; Emily McCabe, Meabh Scally, Aoife O’Mally; Laura Doherty, Fiona Leavy, Amy Cully; Sheila McGrath, Muireann Scally; Aoife Doherty, Ava Balfe, Caoimhe McRossan; Megan Dowdall, Pamela Greville, Denise McGrath.
Subs: Niamh Horan for Denise McGrath, Sarah King for Aoife Doherty, Caoimhe Scally for Ava Balfe, Róisín Scally for Emily McCabe, Aisling Eggerton for Amy Cully
Scorers: Pamela Greville (0-8, 8f), Megan Dowdall (0-2).
Referee: Eamon Cassidy (Derry).