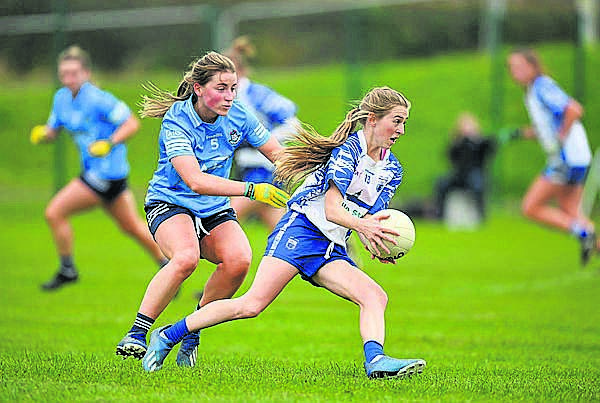 Dublin 0-17
Waterford 1-10
Waterford’s interest in this year’s All-Ireland Ladies Football Championship is over after just one game, but not without giving a Dublin side chasing a fourth All-Ireland Title in a row a massive fright in Baltinglass.
Mick Bohan’s Dublin had a fantastic start to the game as they went 0-8 to 0-2 up after only 19 minutes.
Credit though to Ciaran Curran’s side who battled back to reduce the deficit to two points by the half-time break.
Waterford continued to mount the pressure on the Dublin defence in the second half and when Róisín Tobin netted mid way through Dublin’s lead was down to a point.
However, Dublin’s greater experience on the big stage was the telling factor as they kicked three of the last four scores to win.
Dublin were quick out of the traps in this one with Sinead Ahearne and Caoimhe O’Connor pointing in the opening two minutes. Chloe Fennell hit Waterford’s first score on three minutes and when Sinead Ahearne, from a free, and Róisín Tobin swapped scores it started to look like this could be a close game.
Dublin however enjoyed a purple patch over the next ten minutes in which they kicked five points without reply.
Sarah McCaffrey put the Dubs two up, Carla Rowe, Caoimhe O’Connor, Niamh McEvoy and Sinead Ahearne kicked scores in a seven-minute spell to extend the advantage.
Waterford, to their credit, came storming back. Chloe Fennell put over a brace of scores from frees and Aileen Wall hit one to leave just two between the sides with half an hour played. Carla Rowe edged the lead to three when she pointed in the first added minute, but Stradbally’s Chloe Fennell, who finished top scorer for the Déise, ended the half with her fourth of the game to leave Waterford just two points adrift at the interval.
Wing back Orlagh Nolan opened the second half scoring mid way through the third quarter, but her score was cancelled out by another from Chloe Fennell.
Carla Rowe and Lyndsey Davey followed up with points for the Sky Blues, opening up a four-point lead.
Waterford quickly responded with the only goal of the game. On 43 minutes Noelle Healy fouled Karen McGrath inside the Waterford half of the field. She took the free herself and sent a huge delivery into the Dublin half which Aileen Wall raced onto. The Ballymacarbry player ran at the Dublin defence and laid off the ball to Róisín Tobin, who sent an unstoppable strike past Ciara Trant to leave just the minimum between the teams.
Sinead Ahearne responded with a brace of points for Dublin within a minute of each other, but Chloe Fennell again split the Dublin uprights four minutes from time.
Dublin now had to call on all of their experience gained over the last decade to see them over the line and advance to this year’s semi-final as group winners.
Noelle McEvoy and substitute Lucy Collins hit scores at the Waterford end of the field before Chloe Fennell hit her seventh of the game.
Dublin ensured victory when Sinead Ahearne put over her fourth free of the afternoon and sixth score overall to seal victory.
Ciaran Curran’s side have one game in the round robin section of the competition to play this coming weekend when they will take on Donegal in Mullingar at 1pm on Saturday.
Waterford: Rosie Landers; Megan Dunford, Rebecca Casey, Kelly Anne Hogan; Aisling Mullaney, Karen McGrath, Mairead Wall; Emma Murray, Liz Devine; Chloe Fennell, Katie Murray, Aoife Murray; Aileen Wall, Róisín Tobin, Lauren Mulcahy.
Subs: Róisín Dunphy for Kelly Anne Hogan (9), Aoife Kennedy for Megan Dunford, Caragh McCarthy for Liz Devine (both 61).
Scorers: Chloe Fennell (0-7, 5f), Róisín Tobin (1-1), Katie Murray, Aileen Wall (0-1each).
Dublin: Ciara Trant; Martha Byrne, Niamh Collins, Aoife Kane; Orlagh Nolan, Leah Caffrey, Lauren Magee; Jennifer Dunne, Lyndsey Davey; Noelle Healy, Sinead Aherne, Carla Rowe; Sarah McCaffrey, Niamh McEvoy, Caoimhe O’Connor.
Subs: Lucy Collins for Jennifer Dunne (38), Kate Sullivan for Sarah McCaffrey (45), Niamh Hetherton for Niamh McEvoy (58), Laura McGinley for Orlagh Nolan (61), Muireann Ni Scanaill for Lauren Magee (63).
Scorers: Sinead Aherne (0-6, 4f), Carla Rowe (0-3), Niamh McEvoy, Caoimhe O’Connor (0-2 each), Orlagh Nolan, Lyndsey Davey, Sarah McCaffrey, Lucy Collins (0-1 each).
Referee: Barry Redmond (Wexford).