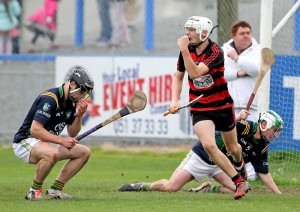 Quite a few County Minor Hurling Finals in recent years have proven most enjoyable games and this drawn fixture on Saturday last proved no different.
At the end of the hour, the draw was the fairest result in this clash of two evenly balanced teams played out before a big attendance, one that could well prove to be even bigger when the two sides replay.
It would have been a brave punter to have stuck their head out at any stage of this game and say with a degree of confidence that one team over the other would emerge as victors. It was that sort of match.
It was the side from the far west of the county that held the initiative at the break as they headed to the dressing rooms with a two-point lead having played with a strong wind at their backs.
Darah Buckley and Peter Hogan had swapped scores before Harry Ruddle, having been set up by Alex Molloy, crashed home the first goal of the game on six minutes.
The Tallow/Shamrocks combination side responded with a goal of their own four minutes later, Ian Beecher crashing to the net having been set up by the impressive Darah Buckley to give his side a 1-2 to 1-1 lead.
The remainder of the first half proved to be an evenly balanced affair as Michael Mahony (2), Peter Hogan and Mark Mullally all got on the scoresheet for the city side while Kelvyn O’Farrell, John Paul Lucey and a hat-trick of scores from Ryan Grey for Cois Bhride followed to give Cois Bhride a 1-7 to 1-5 half-time lead.
The men from the west enjoyed the better start to the second half as Ryan Grey put over three points with Peter Hogan responding with one for Ballygunner to give Cois Bhride a 1-10 to 1-6 lead five minutes into the second half.
Things got even better for Cois Bhride during he remainder of the third quarter as Ian Beecher hit his and his sides second goal of the game on 36 minutes and points from Ryan Grey (2), Kelvyn O’Farrell followed with responses coming from Peter Hogan(2) and Christopher Thomas left Ballygunner trailing by 2-13 to 1-9 after 45 minutes.
Patrick Lambe hit a second goal for Ballygunner with 11 minutes to play but in a strange move he was replaced before the game restarted.
Peter Hogan followed up with a point to leave just three between the sides and with six minutes left to play, Alex Molloy burst through the Cois Bhride defence with a terrific run and smashed a third goal for his side to level matters on the score board.
Ryan Grey,l with a brace of points and Edward O’Neill moments after coming on as a substitute soon put Cois Bhride back in front by three with 59 minutes showing on the clock.
But no game is over till the final whistle is sounded and on 60 minutes the lead was cut to two when Peter Hogan put over a free.
And two minutes later when the same player put a free from 65 out on the stand side of the field all the way to the Cois Bhride net it looked good for the city side to win another underage title.
However deep in added time, Cois Bhride won a 65 just to the right of the upright but Ryan Grey soaked up all the pressure and coolly slotted over to level matters once more and before the game restarted referee Michael O’Brien brought the entertaining proceedings to a close. More of the same come the replay, please!
Ballygunner: Darragh O’Keeffe; Cathal Ryan, David Cullinane, Darragh Hogan; Shane Hannon, Gus Flynn, Mark Mullally; Nicky Byrne, Billy O’Sullivan; Alex Molloy, Patrick Lambe, Michael Mahony; Harry Ruddle, Peter Hogan, Christopher Thomas.
Scorers: Peter Hogan (1-7; 1-3f), Harry Ruddle, Patrick Lambe and Alex Molloy (1-0 each), Michael Mahony (0-2; 0-1f), Mark Mullally and Christopher Thomas (0-1 each).
Substitutes: Michael Smyth for Cathal Ryan (44 mins), Ollie Sharp for Christopher Thomas and Todd Loughnane for Patrick Lambe (both 49)
Cois Bhride: Davy Tobin; Robbie Geary, Jake Beecher, Darragh Mulcahy; Padraig Roche, Jake Neville, Cathal Geary; Jordan Henley, John Paul Lucey; Dylan Mangan, Ryan Grey, Kelvyn O’Farrell; Ian Beecher, Eddie Hynes, Darah Buckley.
Scorers: John Paul Grey (0-12; 0-7f, 0-1 65′), Ian Beecher (1-0), Darah Buckley, Kelvyn O’Farrell, John Paul Lucey, Kelvyn O’Farrell and Edward O’Neill (0-1 each).
Substitute: Edward O’Neill for Dylan Mangan (56).
Referee: Michael O’Brien (Portlaw)