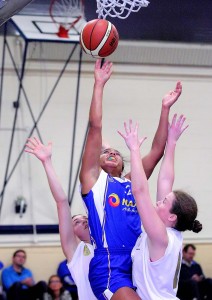 Jazmen Boone in action during Wildcats’ first game of the season at the Mercy Gym. The American star was in fine form last Saturday with 26 points in the Wildcats win over Portlaoise Panthers.

If coach Michael Evans was in need of a stress test then he certainly got one in St. Mary’s Hall Portlaoise last Saturday night as his Wildcats Premier League team who were leading by seven points with one minute 26 seconds remaining almost left victory behind them.
The home side Portlaoise Panthers blazed two late three pointers and with five seconds to play seemed to have won the game with a powerful drive inside to lay up the winner but the referee called a travel violation much to Wildcats relief.
Team captain Sinead Deegan hit one from two on the free throw line as the final buzzer sounded to give Maxol WIT Wildcats a well deserved win as they were the better team on the night.
A packed sports hall of passionate Panthers supporters could be forgiven for thinking different as they provided marvelous support throughout, encouraging their team in what was a nerve tingling game from start to finish.
The lead changed hands no fewer than 10 times, but the important thing is Wildcats were in front at the end.
The Portlaoise outfit led by two points at the half way stage having been up by 10 with thee minutes to the break. Maxol WIT Wildcats in form American star Jazmen Boone hit eight unanswered points to reduce the deficit to a single basket.
From the restart Wildcats had the better of the exchanges and forged six points ahead once again through Boone and WIT student Helena Rohan.
But Panthers came roaring back with their point guard Maeve O Sullivan hitting two of her many three pointers to tie the game once again. Scores were exchanged on a number of occasions with both Mel Stone and Katie Fox netting long range shots, and Ruthie Leavey weaving through the key to finish with some style for Wildcats.
Battling away inside to contain the taller home team Emily Fanning did a good job while her younger sister Annie played a significant part in this crucial victory, providing Wildcats with their first win of the season.
However the night belonged to Jazmen Boone who played every minute of the game netting eight quality baskets and made 10 from 10 on the free throw line. Add to that countless rebounds at both ends of the floor and the WIT student (from Virginia USA) has every reason to be proud of a top class performance.
Top scorers for Maxol WIT Wildcats were Jazmen Boone (26) Helena Rohan (16) Mel Stone (6). Coach Evans now has to prepare his troops for the visit of ‘high flying’ Liffey Celtics this weekend. The Kildare team are the visitors to the Mercy sports hall this Saturday night October 17th with tip off at 7pm.
If this game turns out to be anything like last weekend’s Panthers – Wildcats classic then Wildcats supporters are in for a treat.