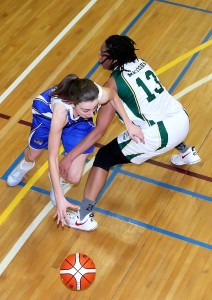 Maxol WIT Wildcats continued their winning ways with a hard fought 55 to 44 points victory over Dublin Meteors at the Mercy Sports Hall last Saturday night.
Possibly not the best game one could wish to see but it was Wildcats first game in three weeks. For a long spell in this game the lack of game practice was obvious as Meteors raced in to a 10 – 2 lead after four minutes.
The Dubliners were really up for it while Wildcats struggled to find their normal rhythm. After eight minutes Meteors led by 10 before a coast to coast lay–up and a last gasp three pointer from Brittany Dunbar eased the concern of anxious Wildcats supporters leaving the Dubliners with a 14-9 advantage at the end of the first quarter . By this stage, Wildcats had not won a single rebound on their own boards in spite of having the three tallest players on the court. Meteors American Monet Reid was simply awesome pulling down every breaking ball while her teammates did an excellent job boxing out. 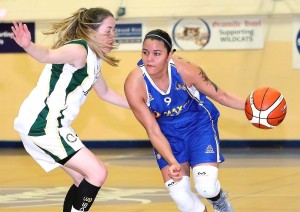 Brittany Dunbar (Maxol WIT Wildcats) goes on the outside of Meteors Eimear Martin.

Wildcats came more into the game in the second quarter with Steph O’Shea finding her range with three consecutive baskets which gave her team a slight advantage.
But just then Meteors point guard Eimear Martin found herself with all the time and space required to hit three three-pointers on the trot to give the visitors a five point lead. As the quarter fizzled out Wildcats captain Sinead Deegan penetrated to make two before a din of noise greeted her amazing three pointer which left the game all square 28-28 going to the break.
The third quarter had scarcely started when Meteors were four points to the good. Two baskets from Helena Rohan levelled the game as Wildcats began to find their rhythm. 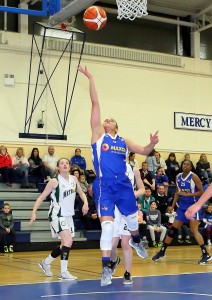 Maxol WIT Wildcats Cathy Kavanagh heading for another score for her side.

Brittnany Dunbar hit a three pointer which was followed by two of the same from Mel Stone. Meanwhile Meteors made several trips to the free throw line but failed to convert making only two from ten which proved costly as Wildcats led 43-32 with the final quarter to play.
One worry for Wildcats facing into the last 10 minutes was that coach Michael Evans was forced to withdraw Sinead Deegan as she was in foul trouble. However there was no need for panic as Cathy Kavanagh made a couple of sweet baskets from the elbow before some quality finishing from DaLacy Anderson put the game out of reach for the visitors.
In fact Anderson worked tirelessly throughout the game getting into excellent scoring positions and scored eight of her 12 points in that last quarter. 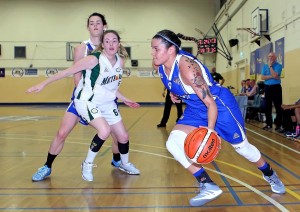 The victory leaves Wildcats in joint second in the Superleague with Liffey Celtics, who they play this Saturday night.
The Kildare side have home advantage but more interesting is that last year’s Superleague player of the year Jazmen Boone who was such an influential player for Wildcats last season is playing with Celtics this year. 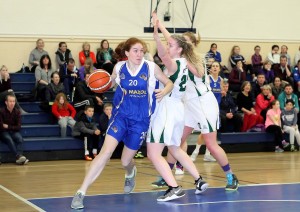 Brittany Dunbar (Maxol WIT Wildcats) drives towards the Meteors half.

No doubt she will welcome her former teamates but knowing ‘JAZZ’ she will want nothing but victory. At the same time, Wildcats will be well up for this encounter knowing a win will keep them well in touch for silverware. On November 26th Wildcats play Cork city side BRUNELL in the first of three consecutive home games.