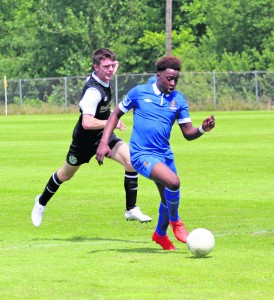 Waterford FC reeled of yet another victory at the RSC on Saturday last. This was their third game within the space of a week and that heavy workload told but they battled hard to get the points which keep them top of the league table.
The previous Saturday they had defeated Shamrock Rovers 5-1 and on the following Thursday won 5-0 away to Limerick in the cup.
Two goals within the space of two first half minutes turned this game on its head and those goals proved good enough to beat a very good Bray team.
Ciaran Brennan created the first chance on five minutes when the attacker raced clear on goal on the left-side but visiting keeper Dylan Davis stood tall to keep out his shot.
From the resulting Colm Whelan left-wing corner kick, Adam Conway headed wide at the back post.
The visitors had a chance to go in front on 16 minutes when Eoin Darcy played the ball out to the left channel for Sean O’Brien but his first time left-footed shot flew over Charlie Heffernan’s crossbar.
The Blues struck for the lead goal with 28 minutes on the clock when in-form Colm Whelan intercepted a back pass from Cian Maher, rounded the advancing Bray keeper Dylan Davis and slipped a right-footed shot to the far corner of the net from an acute angle.
The Blues doubled their lead less than two minutes later when Ciaran Brennan hammered an unstoppable effort to the back of the net.
Whelan was denied his second goal of the game on 59 minutes when he took a pass from Dean Beresford but his shot was superbly kept out by keeper Dylan Davis.
The post kept Waterford from adding a third goal on 61 minutes when Jack Larkin split the Bray defence with an excellent through ball to Colm Whelan but his angled effort came crashing back off the near post.
Bray Wanderer got on the scoresheet to set up a nervy finish six minutes later when Darragh Barry headed home a right-wing delivery from Byran O’Gorman.
Charlie Heffernan made a smart save to keep out an effort from Aaron Byrne soon afterwards and Ciaran Brennan nearly sealed the deal late on but his angled effort was just wide as the young Blues held out for another win.
WATERFORD FC: Charlie Heffernan, Darragh Power, Greg Waters, Adam Conway, Torik Adegoke, Dean Beresford, Mike Nzongong, Jack Larkin, Ciaran Brennan, Colm Whelan, Lee Costello, Jack O’Donnell, Kallum Broaders, Sean Tracey, Oisin Knox, Brendan Kirwan, Regix Madika
BRAY WANDERERS: Dylan Davis, Cian Maher, Jamie Crilly, Liam Moore, Jake Byrne, Aaron Hennessy, Sean O’Brien, Cian Walsh, Eoin Darcy, Daniel Modaghigian, Darragh Kelly, Aaron Byrne, Evan Dunne, Byran O’Gorman, Glenn Hollywood, Conor Dowling, Alex Nevin
RFEFEREE: Gavin Keyes assisted by John Falconer and Brian Bartley
Waterford FC Under 17 John Furlong was happy his side produced a battling performance to defeat Bray Wanderers and remain unbeaten in the Southern Elite Division on a perfect Saturday afternoon last at the RSC.
The Blues, who sit top of the table, were made to work for victory against a visiting side that made life difficult in the final minutes and after nine minutes of second half injury time, the final whistle from referee Gavin Keyes came with a sigh of relief for the Blues faithful.
Speaking after the game, the Blues manager said, “We had to withstand a nervy finish to the game and nine minutes of injury time so I’m just happy to get that game out of the way. It was a very warm day and we’ve played three games in the space of the work.
“I think that we looked a bit leggy towards the end of the game but I still think on the balance of the game, we had the better chances and probably should have got the third before Bray Wanderers scored. I remember a couple from Colm Whelan, who was excellent again today.
“I have to give credit to Bray Wanderers because they never stopped and that’s twice this season that they’ve made us work for victory. They are a very hard team to play against and they showed that today but the lads showed a different side to their game today.
“I thought that our defence was very disciplined in the final minutes because we try not give away free kicks and they showed that. They did well because there was time when we were looking saying one wrong move and it’s a penalty.
“Since the first game where we were conceding one or two goals a game, we’ve seemed to settle down and the players seem to know their roles better now. We talked about it before the game that perhaps we can get wrapped up in your own hype but whilst the result last week was very good, it was only another game.
“I knew today was going to be very difficult and you can’t go out every week playing scintillating football. You got to be able to grind results out and I think we showed that today. As a manager, results like today, whilst not enjoying them, it’s when you look back on them they’re great.
“The result will build morale in the team because it was like backs to the wall stuff for the last ten minutes. It’s great to be still unbeaten but we have a tough game against Cork City coming up on Tuesday evening so we need to recover from this game and move forward.”