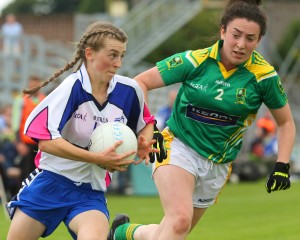 This year’s Munster Senior Ladies Football Final pairing at Mallow on Saturday next has something of a novel look about it, as it doesn’t feature reigning Munster and All-Ireland champions Cork.
In their absence Waterford and Kerry will do battle for the first time in a provincial final since 2003 and this is the 12th time in total that the pair clash will clash in a provincial final.
The most recent meeting of the two counties at this stage of the competition resulted in a 2-12 to 2-10 win for the Kingdom, while you have to go back to 1995 for the last time Waterford came out on top in a Provincial Final between the two when the great Waterford side of the 90s emerged 2-12 to 3-7 winners.
However we don’t have to go back too far for the last Championship meeting between the two sides, as they clashed in the wind and rain at Fraher Field in May, a game that Waterford emerged as victors on a 2-9 to 1-9 score line.
For that game the ladies from the Kingdom arrived into Dungarvan believing that they would overcome the challenge of a Waterford side that in their first year back playing in Division Two in the National League after a three year stint playing in the third tier of the competition, and with Waterford finishing in seventh place, winning two and drawing one of their seven games.
But on the day, Waterford proved to be very much the better of the two sides, as Pat Sullivan’s side fought tooth and nail for every ball and were the much sharper of the two sides.
Waterford, that day, retired at the break holding a 0-7 to 0-6 lead on the scoreboard, adding goals through Michelle Ryan and Róisín Tobin in the second half.
And while Waterford did concede a goal late on as Laura Rogers sent in a dipping effort into the Waterford goal past Jessica Fitzgerald, the hosts ran out as 2-9 to 1-9 winners.
Despite the earlier defeat, Kerry will travel to Mallow confident that they can beat the Déise Ladies at the second time of asking this year, especially after beating Cork recently in Killarney in a game which determined who’d get a rematch with the white and blue.
They will be looking to the likes of Aisling Leonard, Sarah Murphy, Lorraine Scanlon, Amanda Brosnan, Sarah Houlihan, Louise Ní Mhuircheartaigh and Laura Rogers to help them secure this year’s crown.
While some will argue that Waterford didn’t have the best of springs, finishing seventh of eight teams in the Second Division of the National Football League, many of Waterford’s players this year are now clearly excelling.
Last day out against Cork both Caoimhe McGrath and Aileen Wall were outstanding. Against Kerry in the League, Maria Delahunty, Gráinne Kenneally and Katie Murray were outstanding.
Katie Hannon was selected as the best goalkeeper in Division Two of the National League but since coming in for Katie in the first game against Kerry, Jessica Fitzgerald hasn’t put a foot wrong and it will be interesting to see which of the pair gets the nod this coming weekend.
Róisín Tobin is possibly having her best year in the white and blue. Michelle Ryan, having missed the start of the League is showing her ability since returning to the team while the likes of Mairead Wall, Michelle and Karen McGrath, Dearbhaile Ni hAodha and Emma Murray are all proving to be as reliable as ever.
This game promises to be as tight affair as the previous three games played in this year’s Munster Championship.
Kerry, despite being defeated last time out against Waterford could well be the favourites to add to their Roll of Honour. Their experience, after all, has to count for something.
But this is a good Waterford side, one that will not leave Kerry or anyone else for that matter have things all their own way.
Can Waterford record a third win in this year’s Championship and win silverware for the ninth year in a row in the case of some of the panellists. If we were to put it to former US President Barack Obama, the answer would surely be “Yes We Can.”