Linfield 2 Waterford FC 1
Waterford and Linfield met for the first time since December 18th, 1974 when they played each other in Windsor Park on Wednesday night last.
The two clubs clashed at the same venue in 1974 in the final of The Texaco Cup. That game finished scoreless but Waterford had won the first leg in Kilcohan Park on November 7th thanks to a goal scored by Frank O’Neill, the former Shamrock Rovers and Republic of Ireland winger. Yes Waterford were crowned All-Ireland champions 44 years ago. Back in 1968 the clubs met over two legs in The Blaxnit Cup and again it was Waterford who came out on top. 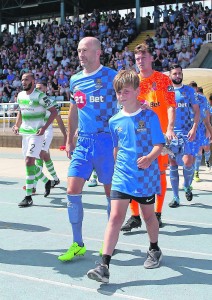 Last week’s fixture brought back many memories for long time followers of the local Blues. The Waterford manager Alan Reynolds used more or less two teams during the course of the 90 minutes and he also ran his eye over four trialists (a central defender and three midfield players) and overall the match proved extremely useful.
The result did not really matter and hopefully a strong link has been forged with the famous Belfast club once again. They are managed by the Northern Ireland goal scoring legend David Healy, MBE and following a disappointing campaign last season they are hoping to take the Irish League title back from Crusaders this term. To date they have won their league an incredible 51 times.
Courtney Duffus did well to win a corner kick on five minutes. Paul Keegan played a teasing delivery into the penalty area, but former Manchester United goalkeeper Roy Carroll came from his line to catch under pressure from Dave Webster.
Linfield carved out a great opening on 16 minutes when Daniel Kearns put a brilliant ball into the danger zone, but the unmarked Jordan Stewart failed to get a touch on the ball much to the delight of the Waterford defence.Waterford’s Noe Baba put in an excellent delivery into the area on 35 minutes but Noel Hunt just failed to connect with the ball as the Blues upped the ante.
Joel Cooper had a brilliant chance to give the hosts the lead goal on 37 minutes when he out-jumped Noe Baba and cracked in a left-footed shot from just outside the penalty that flashed inches wide of the left-hand post of keeper Niall Corbet. 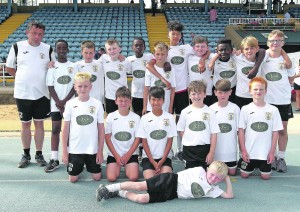 Tramore AFC were the ball kids on Sunday last.

The Blues boss made seven changes at the half time break and it was one of those changes that scored the lead goal on 50 minutes. Izzy Akinade turned provider for Gavan Holohan and he held his nerve to drill the ball past Roy Carroll from 12 yards.Akinade went close to doubling the lead eight minutes later when he rose highest to meet a left-wing Dylan Barnett cross, but his header flashed over.Dean O’Halloran had a good chance to give his side a second goal on 67 minutes but his effort flashed across goal while at the other end, Blues keeper Matt Connor did well to save from Mark Stafford.The hosts grabbed an equalising goal on 82 minutes when Cameron Stewart whipped in a cross to Matthew Clarke who somehow saw his header kept out by Matthew Connor but Mark Stafford drilled the rebound into the net.
There was one final twist in second half injury time as the hosts struck for the winning goal. It looked like Sander Puri was fouled on the edge of the area but the referee waved play on. Kirk Miller raced down the right and crossed to Mark Stafford who struck for his second goal as the Blues were caught on the break.