Waterford FC 0 Shamrock Rovers 1
Two Shamrock Rovers substitutes combined to carve out the winning goal for the visitors at the RSC on Sunday afternoon.
The Hoops came out on top against a Waterford team who were not at their best throughout the 90 minutes.
The Dubliners were well organised despite the fact that they lost their top class midfielder Joey O’Brien in the warm-up and then they had to replace their right-full back Ethan Boyle after only 13 minutes of play. 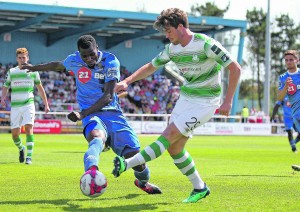 Following their heartbreaking extra-time defeat to AIK in Sweden on Thursday they could have wilted but they kept their shape brilliantly to reduce the gap to just four points as the race for European football next season gathers pace. Waterford had a couple of chances but were unable to take them.
A penalty appeal by the Waterford players in the first half fell on deaf ears and Robert Harvey’s decision not to point to the 18 yards spot changed the course of the contest.
Roberto Lopes, who came into the Rovers starting line-up in place of Joey O’Brien, should have put the visitors in front on three minutes. Ronan Finn whipped in a free kick from the right that fell to the defender that the back post, but he hooked the ball wide of an open goal from six yards.
The hosts were denied a penalty on 21 minutes when striker Courtney Duffus was clearly brought to ground by Rovers defender Roberto Lopes, but referee Robert Harvey awarded a goal kick.
Waterford keeper Matt Connor showed his class with two outstanding saves in split seconds of each other to keep the tie level on 33 minutes.
He stood tall to keep out a cracking effort from Dylan Watts before brilliantly tipping a pile-driver from Ronan Finn over the bar.
Courtney Duffus had the final chance of the half when he reacted at the back post to a Stanley Aborah delivery in the box, but Alan Mannus saved before the half time whistle sounded to boos at referee Harvey for his non-award of that 21st minute spot kick. 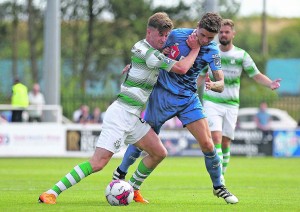 Rory Feely had the first chance of the second half just after the hour mark when he rose highest to meet a Paul Keegan left-wing corner kick, but the defender headed over the bar from deep inside the penalty area.Bastien Héry brought the best out of Shamrock Rovers keeper Alan Mannus when he linked up with Courtney Duffus on the left-side of the penalty area but his right-footed shot from the top of the area was well kept out by the visiting keeper.Waterford missed a sitter on 72 minutes.
Bastien Héry began the move as he played the ball out to Gavan Holohan who saw his low shot saved by Alan Mannus, the ball rebounded to Izzy Akinade but somehow Mannus saved from two yards.
The miss proved very costly as the visitors broke the deadlock less than three minutes later. Sam Bone crossed into the danger zone to Gary Shaw who planted a header past a helpless Connor.
The post denied the home side the equalising goal on 78 minutes when Rory Feely played the ball into the feet of Izzy Akinade, who turned brilliantly onto his right-foot, but his effort came crashing back off the right-hand post with keeper Mannus beaten.
Dessie Hutchinson put in a brilliant ball on 86 minutes that seemed destined for Akinade, but he couldn’t get proper contact as keeper Mannus saved.
Waterford must now put this rare home defeat behind them as they prepare for an away game against Limerick on Friday.