With an eighth successive National 400 Metres Hurdles title in the bag, Ferrybank AC’s Thomas Barr is in justly upbeat mood ahead of the European Championships in Berlin, which get underway on Tuesday next. Barr, who looks in top shape ahead of the trip to Berlin, was in command from the off at Sunday’s Final at Santry, set a new Championship record of 49.56 seconds, with Paul Byrne of Abbans AC second in 51.37 and Jason Harvey of Crusaders AC third in 51.99.
A week on from a season’s best time at the Diamond League meet in London, it came as no surprise to hear Barr in such upbeat mood when speaking to RTE’s Peter Collins directly after securing his eighth National title in a row. 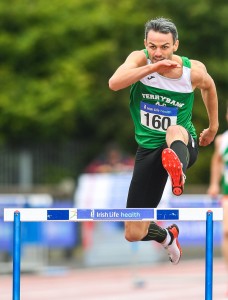 “I love having rounds one after the other,” he said, while watching a replay of his final victory. “On the back straight here, all I was thinking about was that the wind was quite strong so I’d have to come back off the hurdles and just try and stay relaxed – I run best when I’m at my most relaxed – and try and attack each hurdle and then coming down the home straight, the wind was into my face so I had to change my stride pattern. I just wanted to kick for home as hard as I could.”
So what was the champion’s summation? “Very happy with that,” said the 26-year-old, still gathering his breath following his excellent performance. “And obviously that’s the fastest time I’ve ever run in a National. I wanted to go out and get really smooth over the first 200 – it was quite windy in the home straight – but I’m very happy with that. There was a bit of pressure coming into it, going for title number eight so I’m happy to have done the deed.”
Speaking of his pride in winning another National crown, Thomas stated: “I remember when I started at my first National Seniors, I remember hearing over the intercom that it was Derval (O’Rourke’s) ninth title and I thought, God, that’s unreal, going for nine years on the trot and the fact that she was still going after nine years so now I’m at that category and I’m starting to get old and greyer!”
Reflecting on his progress so far this year, Barr admitted: “It was a very slow start to the season, just a couple of technical things weren’t right and over the last couple of weeks we’ve put them right and they’re really starting to come together so I’m coming into form at just the right time. I’m in a nice spot on the European Athletics leaderboard so I’m really looking forward to (Berlin) now in a week’s time.” Between now and Berlin, Thomas’s workload will be light, adding: “We’re on a real taper down at the moment…training this weeks is just going to be a few key sessions, just technique work and technically one hard session and I wouldn’t even call it hard this time of the year so yeah, the hard work is done and I just have to go out and put it down on the track.”
The hard work is done for Thomas Barr. He said so himself. Let’s hope for a Championship to remember in Berlin!