Clashmore Taken to the Brink

Clashmore became the fifth club qualify for the Quarter-Finals of this year’s County Senior Football Championship on Friday evening last when they beat Dungarvan at a damp Fraher Field.
They advanced the hard way in this game as they needed extra time to secure their passage. During the initial 60 minutes they never led and only took the lead for the first time two minutes into extra time. Inter-county star Tadhg de Búrca made a return to the playing front in this game after picking up a serious injury while playing against Clare in the Munster Championship earlier this summer and he made a telling contribution coming off the bench.
Clashmore veteran Sean Fleming also made a big impact hitting five points over the course of the game, and free taker Brian Lynch also made a telling contribution with eight of his nine scores coming from placed balls. 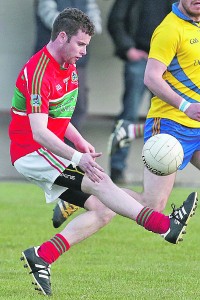 Edmond O'Halloran was one of seven Clashmore/Kinsalebeg scorers as they edged past Dungarvan in the Senior Football Quarter-Final Play-Off. | Photo: Sean Byrne

For the Old Boro Kieran Power was brilliant throughout and he could well count himself to be unlucky to be on the side which must now face a relegation play-off semi-final.
Meanwhile, inter-county player Gavin Crotty also impressed knocking over 11 points, nine of which were from frees.
For much of the first half, Dungarvan were the better of the two sides and looked as if they could upset the odds as they led by 0-8 to 0-6 at the break, having twice lead in this time by three points.
The impressive Gavin Crotty put over three of Dungarvan’s first half scores, all from frees with Kieran Power following up with two from play and there was one each from Kenny Moore, Joe Allen and Darren Duggan. For the Still-Men, Brian Lynch hit four of their points while Sean Fleming recorded a brace.
Dungarvan began the second half again the stronger of the two sides and extended their lead courtesy of a couple of scores from Gavin Crotty.
This point, coupled with the introduction of Bourke proved to be the wakeup call for Clashmore as they hit the next three scores, two from Brian Lynch and one from Sean Fleming left them just one behind (0-10 to 0-9) with 43 minutes on the clock.
Gavin Crotty extended Dungarvan’s lead to two but Clashmore came back with another Brian Lynch free and one from play by Edmond O’Halloran had the sides locked together at 11 points each with seven minutes remaining. Points from Gavin Crotty and Brian O’Halloran were exchanged before Crotty edged Dungarvan back in front with time almost up. But Clashmore refused to give up and when a quickly taken Brian Lynch free fell to Dean Russell he made no mistake splitting the posts and send the game to extra time with the sides locked at 13 points each.
Clashmore took the lead for the first time through Sean Fleming in the second minute of extra time and extended their lead with efforts from Lynch (2) and Tadhg de Búrca while Dungarvan responded with efforts from Gavin Crotty and Michael Kearney to levelled matters at 17 points apiece as the sides again swapped ends.
Declan Allen and Tadhg Bourke put Clashmore two in front early in the second half, to which Kieran Power responded for Dungarvan to leave one between the sides.
The same player had a chance kicking into the country goal but he mis-hit his shot and the danger was cleared.
Clashmore ensured victory two minutes into stoppage time at the end of the 80 when Sean Fleming fired over.