League of Ireland, Premier Division
Waterford FC   3    Sligo Rovers   3
Waterford FC and Sligo Rovers cancelled each other out for the second time this season when they shared the points at the RSC on Saturday night last.When they met in the Showgrounds last month they played out a scoreless draw but this encounter was completely different. 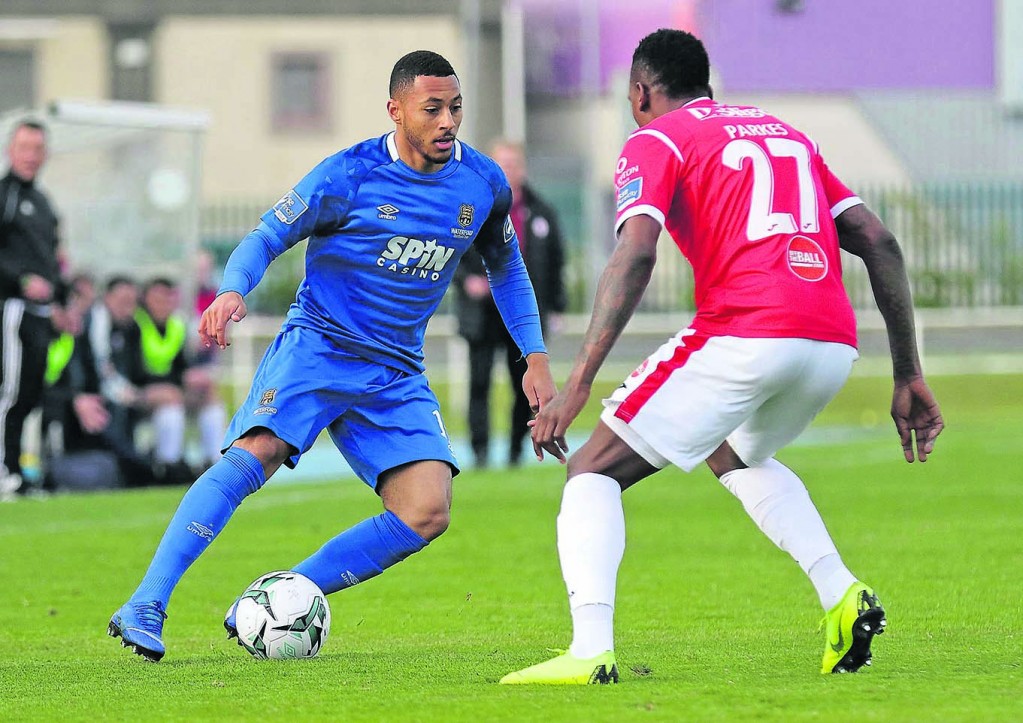 Apart from the six goals, the sides also missed a penalty kick each and both defences were not at their best during the 90 minutes but overall it made for good entertainment for the supporters who turned up for the 7.00pm kick-off on what was a balmy May evening.The result means that the two clubs remain locked together on a total of 20 points on the league table. Waterford never really hit the heights they did against St Patrick’s Athletic the previous week and the same could be said about the visitors who had defeated Shamrock Rovers in their previous outing.
Blues manager Alan Reynolds made one change from the Richmond Park match with Izzy Akinade replacing John Martin.The Blues had a strong penalty turned down on 17 minutes when John Dunleavy seemed to upend Izzy Akinade but referee Anthony Buttimer awarded a goal kick. Sligo struck for the opening goal sixty seconds later when David Cawley got the better of Aaron Simpson and crossed into the area where Kris Twardek bundled the ball past Matt Connor from close range.
The sides were level on 20 minutes and the goal was all about Cory Galvin. He took possession of the ball, raced at the Sligo defence and beat the visiting keeper Mitchell Beeney with a sweet right-footed strike from 20 yards. Waterford looked relaxed after scoring and they found themselves in front on 35 minutes when, after a great run, Zack Elbouzedi crossed to Shane Duggan who thumped a shot off the bar. The ball flew out and hit keeper Mitchell Beeney before rebounding to the back of the net.
Aaron Drinan had the first chance of the second half on 50 minutes but his shot was saved before AaronSimpson crossed for Izzy Akinade five minutes later only for the attacker to head wide.
Sligo shocked the hosts as they drew level on 57 minutes when Ronan Coughlan powered a close-range header past a helpless Blues keeper Matt Connor. Cory Galvin nearly regained the lead for the Blues three minutes later but his stunning strike was superbly tipped onto the crossbar by Mitchell Beeney.
The visitors got their noses in front on 64 minutes when Romeo Parkes beat the offside trap and raced onto a through ball from David Cawley who drilled a low right-footed shot past Matt Connor from just inside the penalty area.Izzy Akinade headed a JJ Lunney cross over the bar soon afterwards and was then brought to ground in the area by the Sligo keeper, after latching onto a long Connor clearance on 73 minutes. Shane Duggan stepped up to take the resultant penalty but his spot kick was saved by keeper Mitchell Beeney.
Akinade levelled the tie for the Blues seven minutes later when he got on the end of a long flicked on throw from Georgie Poynton and lobbed the ball over the advancing Beeney from the right-side of the area.
Sligo had a golden chance to regain the lead from the penalty spot on 83 minutes when Romeo Parkes had a shot handled by Poynton in the area, but Ronan Coughlan’s spot kick was superbly saved by Matt Connor as both sides ended a crazy game with a share of the spoils.