Ray Malone has been travelling to his beloved Anfield since he was just six years old. On Tuesday last he headed to the home of Liverpool FC for the game against Barcelona more in hope than confidence.Thee nil behind from the first leg in Spain very few gave the Reds any real hope of scoring four goals and knocking ‘Barca’ out of the European Champions League. As we all know now, an under-strength Liverpool side achieved the impossible and duly booked a final place against Spurs (who achieved a similar miracle the following night against Ajax) in Madrid on June 1st.
Ray of course is also an avid Waterford FC supporter and his love for the Blues is legendary but here he looks back at his latest visit to Anfield on Tuesday last which incidentally was his 630th visit to the famous venue. 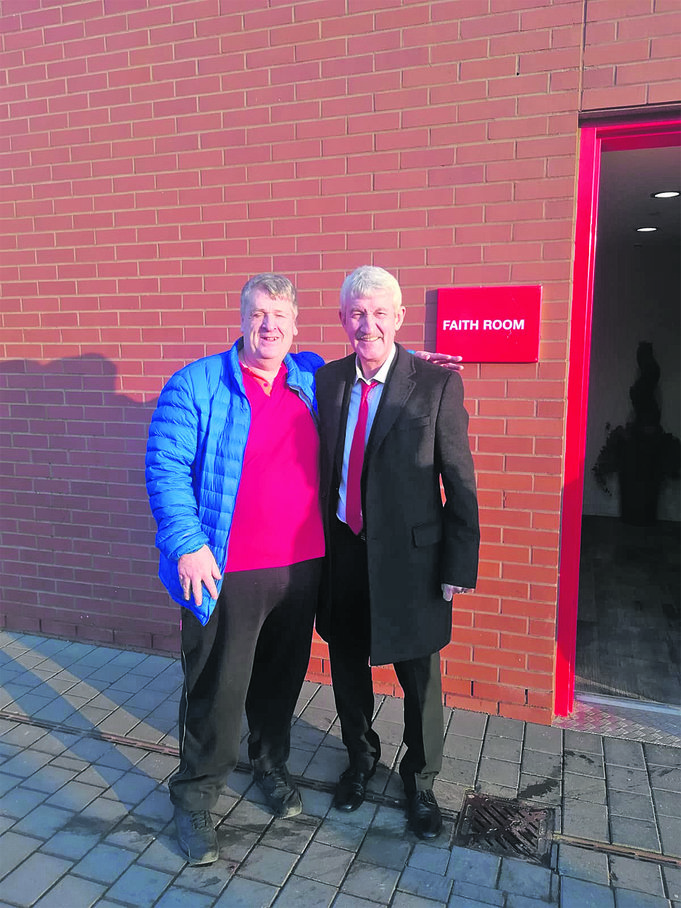 “My journey to Anfield began at the bus station on the Quay and a 2am bus to the Airport. I had decided I was going to go and enjoy the occasion and even the fact Liverpool were 3-0 down from the first leg wasn’t going to deter me from supporting my team. Like all fans I went hoping for a miracle but being realistic it was going to take an effort of Istanbul proportions to have any hope. I was fortunate enough to have been in Istanbul that fantastic night in May 2005 and never thought I would witness anything like it again.
“I had to fly from Dublin to Birmingham simply because it was €30 return compared to €280 into Liverpool. I arrived in Liverpool Lime Street station and went to my hotel for a few hours sleep. I then finally made my way to the ground at 5pm to soak up the atmosphere and it was fantastic. The team bus arrived to very loud singing and flares and smoke bombs and the same was done for the Barcelona bus but not so much singing at that bus.
“It was time then to go into my seat in the new Main Stand which is top class with a fantastic view of the game. My seat was at the press box so very handy for replays. About 15 minutes before the match the noise levels went up massively and once again the champions league music was drowned out by the Liverpool anthem ‘You’ll never walk alone’. The game started more in hope then expectation but an early goal from Origi had the ground buzzing and suddenly it was game on. The usually brilliant Messi wasn’t getting bear the ball and when he did Fabinho and Van Dijk dealt with him comfortably.
“So halftime came and we were all happy that at least we were still in the tie and Barca didn’t create much. Andy Robertson was injured before half-time and I thought that was going to be a huge blow. On came Wijnaldum and of course he popped up with two goals in as many minutes to completely turn the tie on its head. You could see the fear in the Barcelona players as they had thrown away a 4-1 lead against Roma the year before. Then Liverpool got a corner with 12 minutes left and with help from a swift pass from the ball boy, Arnold took a fast corner that nobody including the fans expected and Origi was ready for it and made it 4-0.
We were suddenly gone ahead over the two legs. The noise was just incredible and the fear in the Barcelona players and fans was there for all to see. The last five minutes plus injury time was the hardest few minutes I ever watched as a goal would mean we were out. I had no nails left but we hung on and when the final whistle went it was an explosion of joy and happiness hugging anyone within ten yards and singing our hearts out. I don’t know another sport that can have so many ups and downs but this was up there with one of the best nights ever.
“We stayed singing and the players, management and staff all approached the Kop to sing the anthem once again and it was very emotional. It was an incredible night I won’t ever forget and now the scramble is on to try secure a ticket for the final in Madrid on 1st June. I was in Kiev last year so I’m hoping for a more positive result against Tottenham who incredibly went through also. Fingers crossed that the European Cup will be coming back to Anfield for the sixth time and end an incredible year for the Reds.”