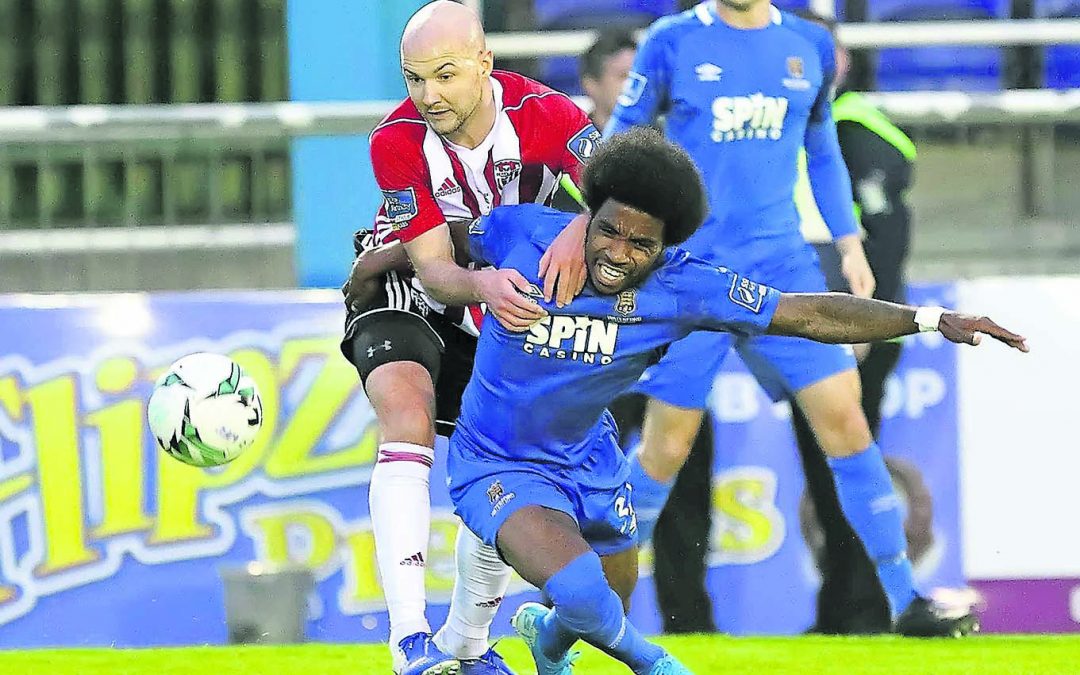 League of Ireland, Premier Division
Waterford FC 1
Derry City 1
Following on from a good display against Shamrock Rovers the previous Tuesday, Waterford FC welcomed Derry City to the RSC on Friday night last. This was a massive game for the Blues because they had not taken anything from their recent home games and as a result their position on the league table was causing concern to the supporters and indeed the Waterford players. 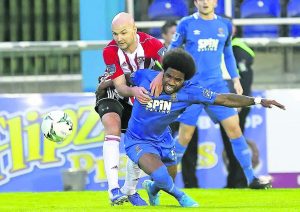 Manager Alan Reynolds made five changes from the team which had lost 2-1 to Rovers four days previously.
Tom Holland, J.J Lunney, Dean O’Halloran, Rob Slevin and William Fitzgerald made way for Kenny Browne, Zack Elbouzedi, Sam Bone, Walter Figueira and Michael O’Connor. Reynolds played a 4-3-1-2 formation and there was a well-balanced look to their formation. However, the Blues got off to the worst possible start when the Candystripes took the lead with their first attack on 11 minutes.
Barry McNamee played the ball to Ciaran Coll who crossed to Junior Ogedi- Uzokwe who chested the ball to the net from close range. Waterford carved out their first chance with a brilliant move on 28 minutes.
Zack Elbouzedi set up Walter Figueira who crossed to the back post where Michael O’Connor’s shot was blocked. John Kavanagh’s angled effort from the rebound was saved by Peter Cherrie.
The Blues began to apply a bit of pressure on the Derry defence and they had a chance on 33 minutes when Figueira shook off two tackles and slipped the ball into the path of O’Connor, but his right-footed shot from 25-yards flew over Cherrie’s crossbar.
Cherrie produced a top save to deny the Blues an equalising goal five minutes later.
Michael O’Connor was fouled by Eoin Toal and Kevin Lynch’s free kick was tipped over the bar by the Derry netminder.The Blues scored a deserved equalising goal two minutes before the break.
Sam Bone’s cross found John Kavanagh who sent in a magnificent ball to the back post and Michael O’Connor powered a header past Peter Cherrie from close-range.Barry McNamee forced Blues keeper Matt Connor into a fine save on 54 minutes while Peter Cherrie cut out a super Michael O’Connor at the other end on 56 minutes.
Kenny Browne went close to putting the home side in front for the first time nine minutes later when he got on the end of an excellent Georgie Poynton left-wing corner kick, but his header went just inches wide of the back post.
The Blues had a great chance to get their noses in front on 80 minutes when a super ball from inside his own half from Georgie Poynton released Walter Figueira but his low right-footed strike from 16 yards was saved well by Peter Cherrie.Michael McCrudden went close with a header for Derry City four minutes later when he got on the end of a Ciaran Coll ball into the area, but the ball whistled over the bar.
Shane Duggan could have won the game for the Blues in the final minute when Georgie Poynton pulled the ball back to the edge of the area for the midfielder, but his first-time right-footed shot flew over the bar.
That was the last action of a thrilling game and the home side were happy enough with the vital point gained.