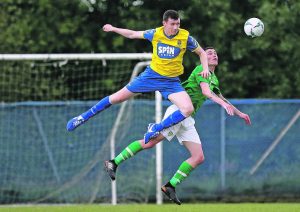 Having not played a game since their EA Sports Cup victory over Bray Wanderers on May 27th, Waterford FC returned to action on Monday last when they played hosts to an Irish Colleges and University squad who are preparing to travel to Naples for the World University games. This was a match that was badly needed from a Waterford point of view and they came out on top in what was a facile victory. Dean Walsh, who has been on the injured list for some weeks, returned to the fold and brought a fine save out of the Colleges goalkeeper David Coffey after six minutes.
Walsh had another effort saved shortly afterwards following a good pass from J.J Lunney. The opening goal arrived on 28 minutes. John Martin was hauled back by defender Joe Manley and Shane Griffin curled the free-kick high into the roof of the net from 20 yards. Two minutes later Damien Delaney, Shane Duggan combined to set up John Martin but he blazed the ball high and wide with only the goalkeeper to beat.
The visitors had a chance on 33 minutes but Shane Daly-Butz missed the opportunity to level matters. One minute later Matthew Connor did extremely well to keep out a cracking drive by Dean Kelly.
Dean Walsh increased Waterford’s advantage on 38 minutes. J.J Lunney and John Martin did brilliantly to get the ball out wide right and Martin’s delivery was touched home at the near post by Walsh. Clearly enjoying his return to action following his long absence through injury Dean Walsh scored one again five minutes into the second half when he was in the correct position to crack the ball to the net from close range after he took a pass from John Martin. Paul Martin, who had replaced Matthew Connor in goal for the second period, produced a wonderful double save on 57 minutes.
He spread himself to deny Dean Kelly and when the ball broke lose Martin saved superbly from David Hurley. Anthony McAlavey, who won promotion with the Blues in 2017, pulled a goal back for the colleges outfit with a well taken free-kick from 20 yards just after the hour mark. Rory Feely netted Waterford’s 4th goal in the 65th minute.
Cory Galvin sprayed the ball out to the right and, without breaking stride, Feely hammered the ball high into the roof of the net from just inside the penalty area. Dean Walsh turned goal provider on 67 minutes when he crossed low from the right and the energetic Cory Galvin completed the scoring by finding the net with ease.
Shane Duggan was denied a goal by Gavin Sheridan near the end. His blistering shot looked goalbound but Sheridan somehow managed to tip the ball around his right upright.