Alan Reynolds, the Waterford FC manager was pleased with the outcome of the match but he was extremely critical of the way the club have been treated in recent weeks. Zach Elbouzedi and Aaron Drinan were selected to play for the Republic of Ireland Under 21 team in the Toulon Tournament and as a result their scheduled league games against Shamrock Rovers, Cork City and Derry City had to be postponed.
The Blues gaffer is not amused by the way the league has been treated: “We have not played a game since the end of last month so we really need that match today. It was good that Kenny Browne got a full 90 minutes and Kevin Lynch for 15 minutes. Dean Walsh played well and he took his goals well also. He has been going great in training and it’s good to have him back. The break has given the injured players time to recover but I will tell you after we play Bohemians and Dundalk whether this break has been good or bad. 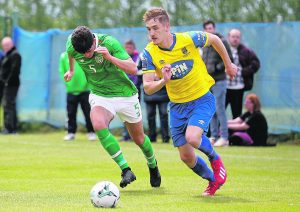 “We have lost some players (Scott Twine, Aaron Simpson and Hugo Keto) and Zach Elbouzedi has now picked up an injury. We will have a very busy schedule in July with games every Monday and Friday and I’m not sure if new players will be coming in at this stage. Our three league games were called off because the lads are playing in a tournament in Toulon and that meant we did not play a game for over a month. I have been looking at the games in Toulon and the facilities didn’t look the best. It’s an Under 21 tournament and back here it looks as if our league had ended. It’s just not right. I could understand if it was the European Under 21 Championships but not for a tournament like that. It’s not an important tournament so why should our league suffer because of it.
Zach Elbouzedi picked up what could be a serious injury out there and he is coming back to Ireland for scans and so on and it doesn’t look good at this stage. It’s been tough on our players training for weeks with no game to look forward to. The official break starts on Friday and my players will be back on Friday, June 21st to prepare for the game against Bohemians on June 28th. Hopefully we will have a friendly game before that match.”