Waterford stunned by late Rovers strike in front of bumper RSC crowd
A bumper attendance of 4,152 were present to watch this clash of two famous footballing rivals at the RSC on Friday night last.
The new look Waterford team got pushed back from the opening whistle and it was Matthew Connor who kept the visiting Shamrock Rovers side scoreless. However a stunning free kick taken by Kevin Lynch put the Blues in front but sadly that was as good as it got for the hosts. 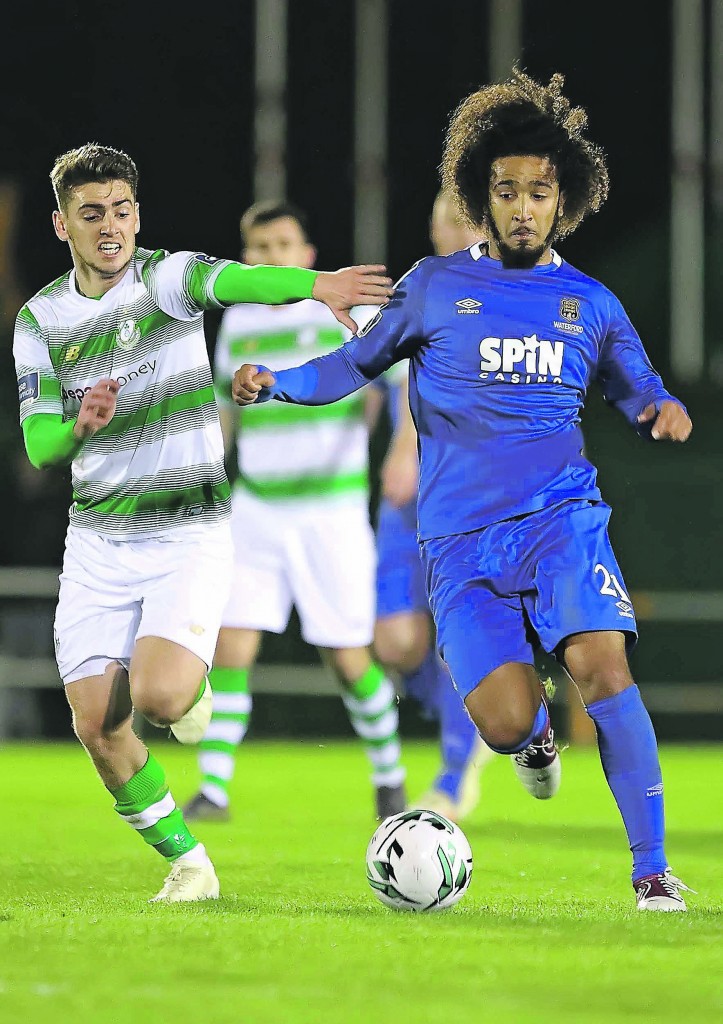 They were outplayed for a considerable amount of time in the middle of the park during the remainder of the contest but that said it looked like they would take a point from the clash. But a stoppage time goal scored by a Ethan Boyle, a former Waterford underage player, gave the Hoops all three points. There were some positive points to take from the game for Alan Reynolds’s charges but they will have to work hard on the training ground this week ahead of Friday’s trip to Cork City.
Franny Rockett, who paraded the dugout area in place of the suspended Alan Reynolds was a very down beat coach when he spoke after the game.
“It’s a very disappointed dressing room at the minute,” he said. “It’s never nice to go back into the dressing room especially when it’s just snatched out of your hands at the death.It’s a point lost from our point of view because we were so close. Every point is precious in the league so it’s just a real deflated dressing room after that, but look we will just have to pick ourselves up after that and move onto the next game.“We played against the breeze in the first half and I think that there was an expectancy in the second half that we would come out better. I think that it suited us in the first half to a point if I’m honest, but it never clicked into place for us in the second half.”
Franny Rockett continued: “We had our chances in the second half as well, but I think it’s fair to say that Rovers also had their chances with Matthew (Connor) making a number of top saves. We were a bit loose in the second half and in the end, I think it showed. “For the winning goal, it’s a simple set play. We only worked on them yesterday and everything was down to tee, but it’s just disappointing that it didn’t click. We could have put pressure on the ball for the first goal as well so they are two disappointing goals to concede.
“I thought that Zack (Elbouzedi) was very good today. He is coming into a new environment, but he showed the courage to wanting to get on the ball and he looked to create things for us. I didn’t think the surface wasn’t perfect and the wind didn’t help.”
Rockett concluded: “There are experienced lads in the dressing room and they’ll pick the younger lads up from this. Everyone is going to be deflated now, but we’ll move on from it very quickly. We need to move on now and prepare for the trip to Cork City next week.”