Young Blues too hot for Reds

Pre-season friendly
Shelbourne 0 Waterford FC 3
A young Waterford FC team recorded a fine victory in Tolka Park on Friday night last in what was their last pre-season game ahead of the new league season which gets underway this Friday with a home game against Shamrock Rovers.Manager Alan Reynolds fielded a number of the underage players with many of the new signings not playing through injury and international duty, but the Blues boss would have been happy with his sides’ performance.John Martin had the first chance on 13 minutes but his left-footed shot went over the bar. Four minutes later Ciaran Kilduff had a header deflected out for a corner kick. 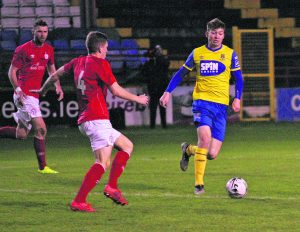 Rory Feely on the attack for the Blues against Shelbourne.

Lorcan Fitzgerald struck the near post direct from a corner kick soon afterwards and on 18 minutes Dean O’Halloran crossed into the penalty area for Cory Galvin but he failed to hit the target with a close-range header.The Blues struck the front on 41 minutes when Bastien Héry played the ball into the path of Rory Feely and he rifled a right-footed shot from 20 yards past a helpless Dean Delany.
Waterford doubled their lead on 43 minutes when an excellent through ball from John Martin released Dean Walsh clear and he finished to the net from deep inside the penalty area as the Blues went in at the half time break in control.
The Blues made a number of changes for the second half and Waterford keeper Matt Connor came to his sides rescue on 54 minutes when Shane Farrell took a pass from Alex O’Hanlon, but his stunning effort was magnificently tipped onto the crossbar.
Regix Madika, who replaced Bastien Héry at the half time break, set up Cory Galvin on 67 minutes and after an excellent advantage from referee Tomas Connolly, the ball found Jack O’Donnell inside the penalty area, but his shot was straight at keeper Dean Delany.
Madika went close with a header on 73 minutes after he got on the end of a Shane Griffin delivery, but his header went wide.
Dean Walsh added his second goal of the game two minutes later when he let fly with a shot from 25 yards and after his shot took a deflection, the ball sailed past keeper Delany.
The Blues were determined to keep a clean-sheet with Maxi Kouogun having a fine game in the heart of defence and there was one final chance for the hosts with five minutes remaining when Dayle Rooney put the ball on a plate for Ciaran Kilduff, but he blazed wide from 12 yards. All focus for the Blues now turns to the opening game of the season against Shamrock Rovers at the RSC on Friday night next, February 15, with a 7.45pm kick-off.