FAI Cup, First Round
Skerries Town 1 Waterford FC 4
Noel Hunt wrote himself into the record books on Saturday last when he scored a treble against Skerries Town on what was a wet and windy day in North Dublin.
As an extremely strong breeze blew in from Dublin Bay, the Blues player-coach made little of the conditions as he struck a treble to give the Blues a first FAI Cup win since 2012.
His three goals in this contest now means that Hunt has now scored hat-tricks in three different cup competitions; for Reading against Crawley Town in the English FA Cup and for Dundee United against Clyde in the Scottish FA Cup. 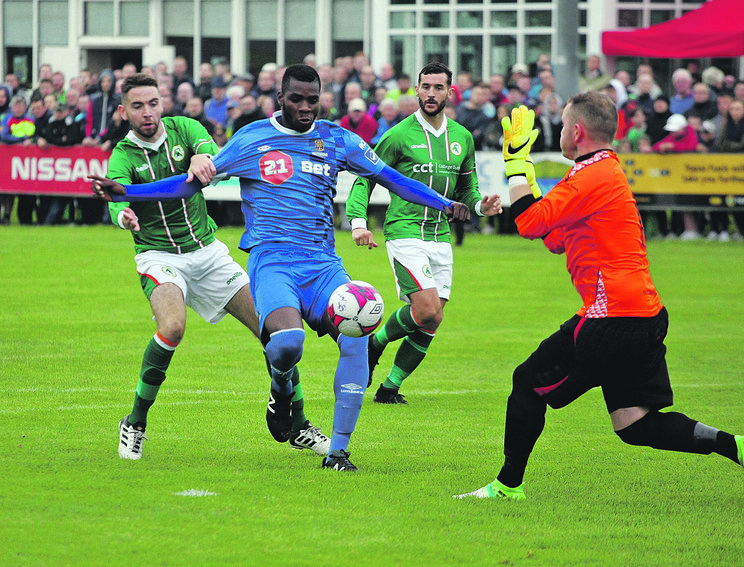 He became the first Waterford player to score a hat-trick in the FAI Cup since Gavin Doyle against Douglas Hall in May 2006, a game the Blues won 5-0. The match was played in the Skerries Rugby Club ground and they had the beautiful venue in pristine condition.Alan Reynolds charges opened up brightly and almost scored after seven minutes but Izzy Akinade struck the crossbar.
Akinade laid the ball into the path of Bastien Héry on 11 minutes but his strike was held at the second attempt by home keeper Shane Davis.An excellent Noel Hunt strike gave the Blues the lead on 23 minutes. All of 40-yards from goal, Hunt spotted Skerries keeper Shane Davis off his line and tried a snapshot that sailed over Davis’ head to settle the nerves of the Waterford fans.
On 36 minutes Izzy Akinade had a header blocked out for a corner kick that yielded the second goal. Paul Keegan’s delivery from the left wasn’t dealt with by the home defence and Gavan Holohan took full advantage to blast the ball to the roof of the net.Bob McKenna could have halved the deficit for Skerries Town three minutes into the second half when he rounded keeper Niall Corbet, but his shot only found the side-netting. Noel Hunt thought that he had scored his second of the game when he found the net with a tremendous free kick, but somehow an assistant’s flag ruled the goal out.
Skerries Town went up the other end of the field and pulled a goal back with a large slice of luck on 53 minutes.Brian Snowe cracked a left-footed strike and the ball took a wicked deflection off a Blues player and past a helpless Corbet.Shane Langan was off target with a header on 65 minutes before Garry Comerford struck the woodwork direct from a corner kick soon afterwards and when the ball broke to Gavan Holohan, his left-footed volley flew inches over the crossbar.A third Waterford goal put the tie beyond doubt on 85 minutes. Noel Hunt finished a Paul Keegan left-wing corner kick to the net with a fine header and the striker netted his hat-trick with a carbon copy of that goal in the final minute of the game.