After losing three consecutive league games Alan Reynolds the Blues manager was delighted to see his team get back to winning form in this tricky tie against a talented Skerries Town outfit.
“I’m happy with the result. I thought in the first half of the game that we played the conditions very well. We approached it right and were real professional in our manner. I just thought in the final third that we could have had a few more goals in the first half.“We came out at the start and we were sloppy which allowed them to get a goal. We haven’t won a cup game in six years in the first round so I’m just delighted to be in the next round now and to get a win under our belts.
“We hadn’t won in the cup since 2012 and let’s be honest it was a real banana skin coming here. We’re working hard, and we just haven’t got the break of the ball the last three weeks. We need to get ready now for Derry and keep going. 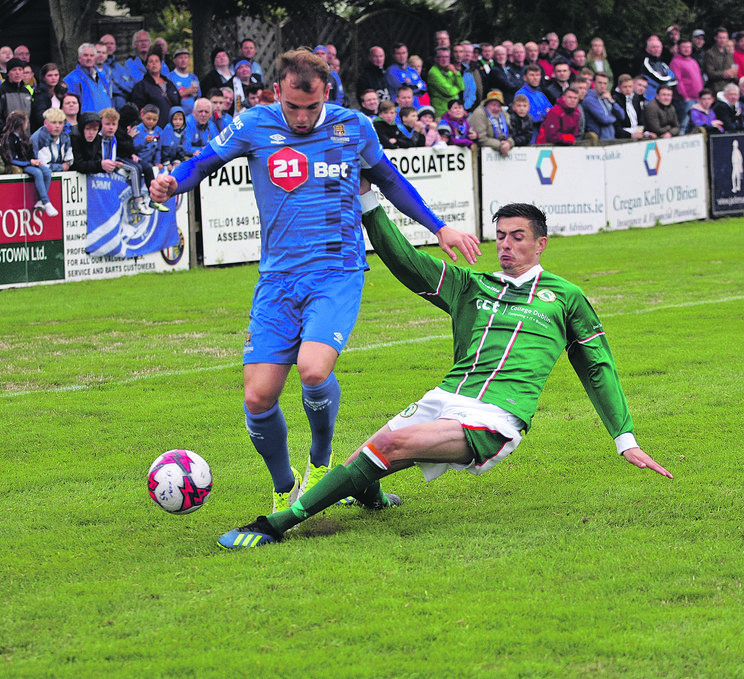 “I thought Noel Hunt was excellent and you could see the touch of quality about him. His finishing was good as well. He is a great asset for us to have and to show the few younger lads in our squad how to do it so hopefully that game under his belt will stand to him.Reynolds is hoping that this win will give the squad confidence.
“The three goals will definitely help Hunty but we have players that are digging deep at the minute. I think that some of them maybe feeling sorry for themselves at times, but we’re back on track with the win here.“We need to get back to doing what we’ve been doing all season and prepare for the trip to Derry. We will be able to get Kenny Browne and David Webster back. I was happy to see Reniar Rode and Garry Comerford get ninety minutes because they need it. Hopefully we’ll have a fully fit squad going into next week.
“It’s great to have Garry Comerford back because he played ninety per cent of last season for us and he is a real asset and so is Dessie Hutchinson. I have been saying it since the start of the season that we have a great dressing room there.
“We are a little bit wounded and hurting at the minute, but we can’t feel sorry for ourselves. It’s good to get the win today and hopefully we’ll be able to build on this result going into the game against Derry. There have been ups and downs but the main thing here today is that we’re in the next round.
“I’d love a home draw in the next round because we have a run of away games coming up. We’re not due to play at home until September 14th so hopefully we can get a home draw against a nice side so we can continue this run in the cup.”