League of Ireland, Premier Division
Waterford FC 2 Derry City 2
Shane Duggan slotted home an injury time penalty to secure a point for Waterford FC at the RSC on Easter Monday. When Darren Cole unleashed an unstoppable ball past Matthew Connor on 88 minutes it looked as if the Blues were heading for a home defeat. But Aaron Drinan was sent tumbling inside the 18 yards box in injury time and Duggan took full advantage to earn a share of the spoils. Following the excitement of the win over Cork City the previous Friday this was a rather flat affair but at least the late drama gave the fans something to shout about. 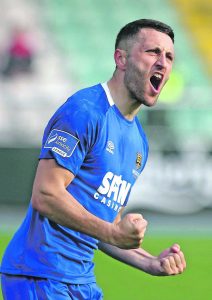 Waterford FC’s Shane Duggan celebrates his late goal which secured a point for the Blues.

Waterford opened brightly with Scott Twine’s header on four minutes just off target. Aaron Drinan had the ball in the back of the Derry net eight minutes later but it was ruled out for offside.
There was a big let off for Waterford on 32 minutes as the visitors missed a golden chance. Jamie McDonagh sent in a cross that found Parkhouse free inside the area, but somehow he failed to find the net.
The Blues had an opportunity at the other end four minutes later when Scott Twine won the ball after a loose Derry clearance and set up Aaron Drinan but his shot was saved by keeper Peter Cherrie.
David Parkhouse gave Derry a deserved lead on 42 minutes when he raced to the near post to meet a Barry McNamee cross, and hammered the ball past Connor from six yards.
Izzy Akinade, who had replaced Karolis Chvedukas at the half time break, equalised on 62 minutes when he beat Josh Kerr, after an excellent through ball from Bastien Héry and drilled a right-footed shot to the far corner past Peter Cherrie from 14 yards.
Aaron Drinan had a chance to give the Blues the lead on 79 minutes but his shot from outside the penalty area was over Cherrie’s crossbar.Eoghan Stokes should have done better with a chance for Derry five minutes later but he blazed the ball high over Matt Connor’s crossbar from 14 yards.There was nothing Connor could do as Derry looked to have grabbed a stunning winning goal on 88 minutes. Darren Cole took advantage of a mistake from Aaron Simpson and cracked an unstoppable effort from 25-yards into the top right-hand corner of the net.But there was one final twist in the third-minute of added time. Referee Tomas Connolly awarded Waterford a penalty when Aaron Drinan went to ground under a challenge from Jamie McDonagh and Shane Duggan planted the penalty past Peter Cherrie.