League of Ireland, Premier Division
Bohemians 0 Waterford FC 0
Waterford FC fully deserved a point from this game against Bohemians in Dalymount Park on Friday last. The ‘Gypsies’ went into the game on high following their victory over their arch rivals Shamrock Rovers four days previously while the Blues had drawn 2-2 with Derry City.Izzy Akinade and Maxi Kouogun were the two changes the Blues boss made for the game against a Keith Long team who have yet to concede a goal from open play.Bohemians had the first real chance to open the scoring on nine minutes when Robbie McCourt slipped the ball out to Ryan Graydon, who put the resulting cross on the head of striker Ryan Swan, but the former UCD player failed to hit the target.Rory Feely cracked in a strike from 25-yards for the Blues sixty seconds later, but his effort went wide of Talbot’s right-hand post. 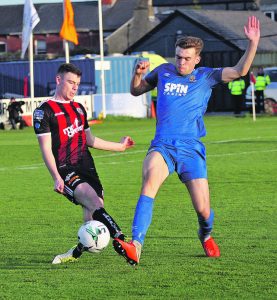 Blues captain Damien Delaney gave away a free kick in a dangerous position on 26 minutes when he fouled Ali Reghba, but the effort from Bohs midfielder Keith Ward was straight at goalkeeper Matt Connor, who saved with ease.Bohs keeper James Talbot produced a top save at the other end less than two minutes later when Zack Elbouzedi crossed to JJ Lunney but his drive was tipped over the crossbar.
Elbouzedi found space once again on 32 minutes and sent in a cross to Izzy Akinade, who turned Aaron Barry superbly, but shot straight at keeper Talbot from 12 yards.
There was a let-off for the Blues five minutes before the half time break when Ryan Graydon whipped in a left-wing cross to Keith Ward at the back post and when he put the ball across the penalty area, Maxi Kouogun’s close-range clearance just cleared the crossbar.
Rory Feely carved out the first chance of the second half for the Blues on 53 minutes when he cut in from the right-side of the penalty area but his shot was well saved by keeper James Talbot.
Dinny Corcoran should have put the home side in front within two minutes of his introduction on 61 minutes when he got on the end of a Ryan Swan cross six yards from goal, but the striker’s effort was deflected out by the slightest of touches from Damien Delaney.Two minutes later Zack Elbouzedi put in an excellent right-wing free kick into the six-yard box for Izzy Akinade who knocked the ball down to Rory Feely, but he was judged to have fouled as he teed up a shot.A fine Waterford move down the right side on 81 minutes saw JJ Lunney link up with Feely, who put in a great delivery into the Bohs penalty area, but captain Aaron Barry hacked the ball clear as the Blues continued to press for the opening goal.
The home side nearly struck the front with a sweeping move three minutes later.Paddy Kirk charged forward from his left-back position to take a final pass from Dinny Corcoran, but his left-footed shot from 20 yards flashed inches wide of Connor’s right-hand post.There was a final heart in the mouth moment for Blues fans in the final minute when Bastien Héry conceded a free kick on the edge of the area when he brought Keith Ward to ground.Ward however failed to trouble Matt Connor as the ball went over the bar.