Munster Minor Football Championship Round Robin Round 3
Waterford 2-7
Clare 1-9
Tom Guiry’s Waterford Minor football team recorded their first win in this year’s Munster Minor Football Championship at Fraher Field on Wednesday evening last thanks to two late goals both from DJ Melia.Late scores which turn games around are often the story behind the game but the brace of goals by the Brickey Rangers clubman player was only the secondary story in this battle.The attendance of just over 200 people had a much later finish to the game than anyone had expected.The start of the second half was held up for about an hour as officials waited for the arrival of an ambulance after Clare wing back Matthew Reidy picked up a facial injury just before the break when he and fellow team mate Tomás Meenahan accidently clashed with Déise corner-back Archie Walsh while contesting a ball in front of the stand.Both Clare players were substituted with Reidy requiring medical attention in the dugout until the arrival of the ambulance. Reidy was then taken to hospital for further treatment for his injuries.
Shane Meehan opened the scoring for the visitors from a free before his effort was cancelled out by a point from Sean Walsh in the fifth minute. 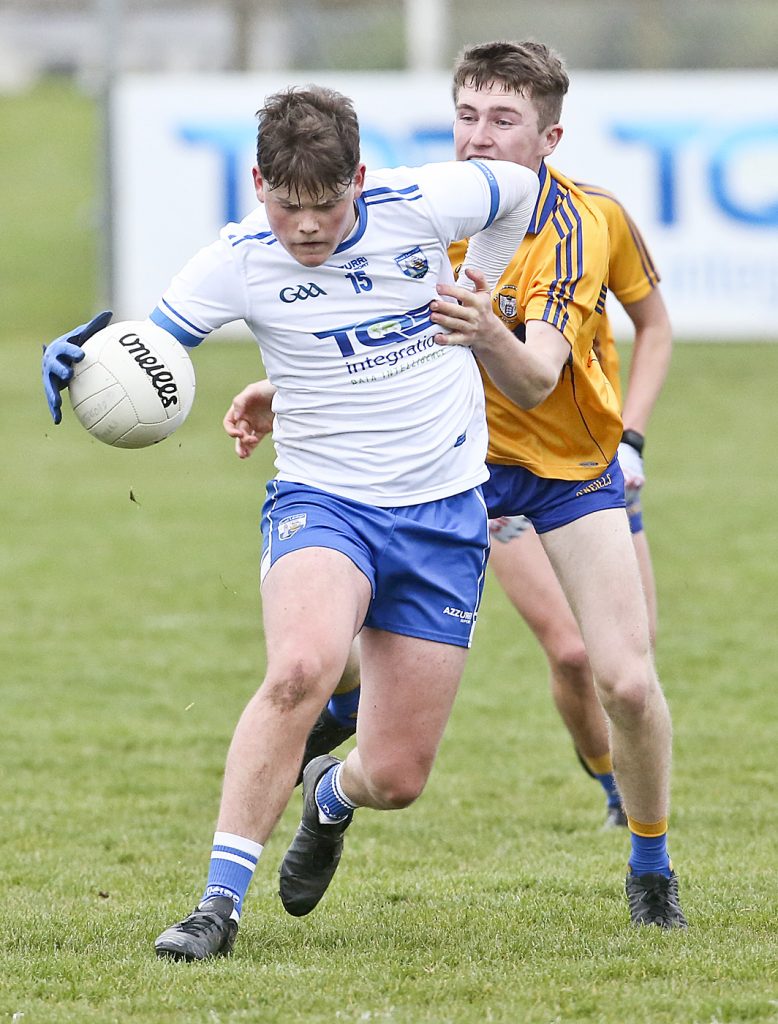 Waterford's Tom O'Connell with the ball against Clare's Keith Crowley

Both sides wasted scoring chances but Clare scored the first goal of the game on 19 minutes as Liam Murphy passed to Tomás Meenahan who palmed to the net. The visitors quickly followed that score up with a point from Tadgh Lillis who had come on for McGroary.The quick-fire double brace of scores by the Banner Men failed to spur them on however and Tom O’Connell next for Waterford on 22 minutes to leave Meenahan’s goal separating the sides.Both sides landed one more score each before the half-time whistle was blown. Lillis scored his second of the game with a delightful touch of his right foot to put his side back in back in front by four, but an Aaron Ryan effort on 28 minutes meant that the sides went to the dressing rooms for a longer than usual half time break with Clare leading 1-3 to 0-3.
Clare were once more first out of the traps when the match finally re-started as Eoin Rouine put his side back in front by four, but Tom O’Connell reduced the deficit to three once more on 32 minutes.
Clare however landed the next three scores with Shane Meehan accounting for two of them from frees and sub Jamie Stack hit one to help open a six-point advantage for the visitors.
But you write any Waterford side in Fraher Field off at your peril and points from Aaron Ryan and Tom Dalton followed for Waterford to rein in Clare’s lead, but it was momentarily widened once more when Eoin Talty pointed with nine minutes remaining.
Two minutes later DJ Melia fired the first of his goals to the roof of the Clare net with a thumping effort to leave just two between the sides. And when Tom Dalton followed up with a point the Waterford support inside the ground were asking themselves could the hosts get something against a side that had won their previous two games.Liam Murphy pointed for Clare to edge them further in front, but time was not up on the referee’s watch yet. In the last minute Aaron Ryan was fouled inside the box by Tadgh Lillis and a penalty was awarded which Melia fired to the net giving Waterford a deserved win and a boost overall for the game in the county.