Waterford FC continue excellent form with 2-1 win over Dundalk
Waterford FC followed up their battling away win against Bohemians the previous Monday when they defeated Dundalk at the RSC on Friday night last. An attendance of over 3,500 watched an extraordinary match which had just about everything and the outcome moved the Blues to the summit of the Premier League alongside the Lilywhites and Cork City.
It has been an amazing return to the top grade league for a club which languished in the First Division for 10 years and now many pundits are sitting up and taking notice of this exciting squad of players and predicting that Alan Reynolds and his players will be genuine title contenders.
The entire course of this game changed after 39 minutes when the Dundalk skipper Stephen O’Donnell had to be stretchered off and a long delay was the outcome.
Shortly afterwards Izzy Akinade scored his first league goal for Waterford and three minutes later he scored once again.
Moments later Ronan Murray struck a wonderful free-kick to bring the visitors back into the game and all of those goals were scored in the extended first half.
Both sides created chances in the second half without scoring and when the final whistle sounded the Waterford supporters and indeed players went ballistic with excitement. 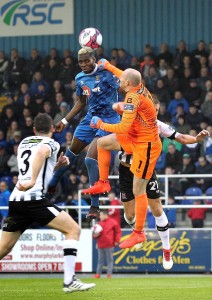 This is simply dreamland time for the loyal fans.
Blues manager Alan Reynolds was thrilled with the win and the support. “It was fantastic to see such as crowd here tonight. They drove us on when our backs were against the wall. They were amazing. We have just being talking about them down there in the dressing room. They got behind us when we needed them.
“The players were great also and week after week they keep producing so it was a good night all round. I am delighted for Izzy Akinade to get off the mark. He was very lively and is a real handful when he plays like that. He and Courtney played closer together this evening and that is what I wanted. Hopefully Izzy can kick on from here and I think he will. The two of them are a real treat up front.
“We can get caught out in the wide areas at times because we don’t play wide players as such but we sacrifice that area at times to get Gavan Holohan moving forward and setting up chances for the two lads. We were excellent once again at the back tonight and Rory Feely and David Webster did very well. I have just spoken with Rory down there in the dressing room and I believe there is a very good player in him. He wants to improve all of the time and that’s great.
Alan broke into a loud burst of laughter when it was put to him that the league title could be won. “Ah Jesus, hold on a minute. As long as we don’t get relegated, I’ll be happy,” he retorted.