Football in Waterford and the State We're In

On Saturday, May 19th, Waterford will travel to Semple Stadium to take on Tipperary in the quarter-final of this year’s Munster Senior Football Championship.
As someone who’s been watching the Waterford footballers going back to the mid-1980s, I for one would love to be able to state that the Déise will see off Tipperary a week on Saturday, but I just don’t see that happening. If Waterford lose by a considerable margin, it will be very hard on the players, as we often fail to admit or recognise that our footballers put in the same effort and maybe an even greater effort than our hurlers and don’t get the recognition for doing so.
Football in Waterford, both inside and outside of the county, is often at the butt of many jokes.
But football in Waterford is nowhere near as poor as some would suggest, and for proof of this you only have to look at what the likes of Stradbally, The Nire and Ballinacourty have achieved in the Munster Senior Club Championship in the last two decades, despite the fact that neither has ever won the competition yet.
What football in Waterford needs is a plan, one that will be stuck at no matter what, and one that will be fully supported by both clubs and officers of divisional and county boards like at adult and underage level.
Some years back a plan was put in place in Tipperary for football. I have no doubt when the dream for football in the Premier County was shared there were many within the county, and even more outside of the county who would have left.
This after all was the third most successful county in hurling behind Cork and Kilkenny and “nobody was interested in football in Tipperary” apart from a few clubs in the south of the county. 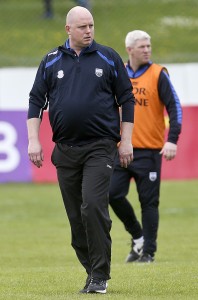 I wonder how many right now, who laughed at the vision for where football in Tipperary would be in 2020, are laughing now.
When you consider the progress made in the county in the last number of years at underage levels where success has come in the Minor and Under-21 grades, and the counties senior team with many of the players from these underage successes now involved, are moving in the right direction.
Could the same happen in Waterford? I for one cannot see why it can’t happen. But is there anyone brave enough to stand up in what many would call a hurling county and share their vision for where football in Waterford will be in 2035 or 2040.
But if someone did stand up and share their vision for football in Waterford and a committee was put together, would they get the support they need to see their vision come to fruition. Something tells me the answer in the short term might be they might, but in the long term no.
You only have to look at what has happened in the last few years to see why.
How many times have we seen the football championships in the county delayed so that the hurling championships are completed so that the county has a representative in the Munster Club Championship?
How many times have we heard when this happen the problem lies with the number of dual clubs within the county?
And we don’t have to go back to past years as to see what happens. We only have to look at what has happened so far in 2018.
This year we all know there was a restructuring of the League and Championships on the senior inter- county scene.
April, we were told was to be set aside for the club scene, giving counties that run their Championships on a league style competition, and who have aspirations of being around late in the Championship the chance to get some club games played early in the year so that they are not rushing them off late in the year.
Here in Waterford we began with two round of hurling games in the first two weekends of April, followed by two rounds of football.
But as soon as the hurling championship games were played we had players who play football with their clubs competitively, back with the county team before they got the chance to play with their clubs in football.
Is this right, I ask you? Is this a way of helping to promote football in the county? In the time between Waterford’s relegation play off with Cork and the two rounds of hurling taking place, were the players with the clubs or were they training with the county as well?We had the Waterford Minor Football manager Tom Flynn speaking out recently about the problems with dual players. He told us that there were a number of players that would be deemed good enough to be part of the Waterford Minor Hurling and Football panels this year, but that only one player got involved in both. He told us that he had players playing soccer and rugby in his football panel and there was no issue between the management teams of both sports but there was a problem with players playing both hurling and football.
This is an age old problem in Waterford.It is nothing new. I was involved with the Waterford Minor Football team as team secretary in 2002 and 2003 and it was a problem back then. But the problem always seems to be with the hurling side of things.
I can vividly remember back in late 2001 or early 2002 a member of the Waterford Minor hurling management team attending a delegate meeting of Bord na nÓg in Dungarvan and standing up saying they did not want players in their panel who were division three and four players, meaning players who had played in these grades at Under 14 and 16 levels.
But the management team discovered that they could not put together a panel considered good enough from the top two flights and had to go looking for players who had played in Divisions Three and Four at Under 14 and 16 levels to make up their panel of 24 or 26 players.
I vividly remember how the football management team decided to test the commitment of their players, the majority of whom played with clubs in the west of the county and called a training session for 8am on a Sunday morning at De La Salle College, laying on transport for all players on-route.
To the credit of the players, each and every one of them showed up and were on the field in advance of the 8am start.
But about 20 minutes into the session two cars pulled up and five players were ordered off the field and into the cars of two of the Waterford Management team to be transported back to West Waterford for a training session with the hurlers.
Back then I heard calls that the problems that manifested between the hurling and footballers would be sorted out but never happened.
I have no doubt when we hear problems to this day, behind closed doors, those involved will be told that the problems will be sorted, but from what I for one can see, nothing ever happens and I have no doubt we will hear of problems again in the future.