Waterford FC 2 Dundalk 1
Waterford FC continued their brilliant return to the Premier League and firmly stamped their title contenders status when they defeated Dundalk 2-1 at the RSC on Friday night last. An attendance of over 3,500 watched an extraordinary match which had just about everything.
Dundalk controlled most of the first period. Michael Duffy was a threat down the right but he fired wide on 12 minutes after skipping past Waterford’s Stanley Aborah.
Duffy had another chance eight minutes later but once again fired wide.
Waterford had their first real chance with ten minutes to half-time when Izzy Akinade’s header from Aborah’s cross forced Rogers into a good save.
The Blues took the lead on 47 minutes. 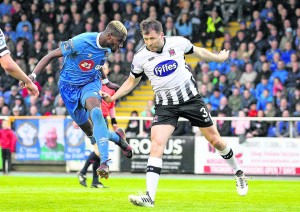 Waterford FC’s Izzy Akinade went close with this header in the first half.

An injury to Stephen O’Donnell meant six minutes of additional time – and Waterford took advantage.
Rory Feely swung the ball in for Izzy Akinade who rose above Dundalk keeper Gary Rogers to give his side the lead two minutes into added time.
The Blues doubled their advantage in the seventh minute of stoppage time when Garry Comerford fizzed the ball into the feet of Akinade and he held off three defenders and slotted the ball low into the far corner. It was a top class finish by the big Blues striker.
Dundalk pulled a goal back in the ninth added minute of the half when Ronan Murray fired a superb free kick into the top corner that gave Lawrence Vigouroux no chance whatsoever. It was a superb finish by the visiting midfielder. 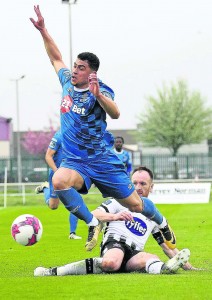 The hosts started the second half well and Gavan Holohan went close with a low strike minutes into the half before Pat Hoban saw his header easily saved by Vigouroux.
Paul Keegan had another chance for the Blues just after the hour mark but he fired off the inside of the post and across the face of Rogers’ goal and clear.
Hoban had another great chance as the game entered the final quarter when he fired wide after a good cross from Duffy.
Robbie Benson went close for Dundalk with four minutes remaining but he fired wide from deep inside the penalty area.
Chris Shields thought he had levelled in added time but his effort was blocked out by a Garry Comerford intervention.
Dylan Barnett brought a superb save out of Dundalk goalkeeper in the fourth added minute as his cracking left-footed strike was turned around the posts and the sound of the final whistle brought unbridled scenes around the RSC. It was one of those very special nights and a match that will be spoken about for a very long time to come.