Sam Bennett powers to Grand Tour stage win
Sam Bennett is the toast of the cycling world following his magnificent Seventh Stage victory in the Giro D’Italia on Friday last, when he became the first Irishman to win a stage on the event since Stephen Roche back in 1987.
The 27-year-old Carrick-on-Suir rider delivered a victory he’s been threatening on the Grand Tour stage for several years, as he powered to victory at the end of the 158-kilometre stage into Praia a Mare, seeing off the hotly tipped Elia Viviani.
This followed third place finishes for the Bora-Hansgrohe rider on Stages 2 and 3 (Tel Aviv and Eliat in Israel), in addition to second and two further third placings in last year’s Giro. 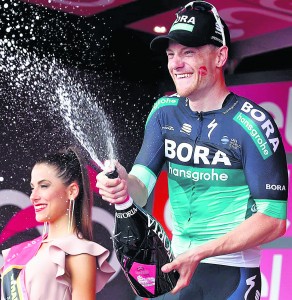 The spoils of victory: Sam Bennett savours his stage seven victory in the Giro D’Italia on Friday last.

“The first few stages I just got the timing a bit wrong,” said Sam, who had lost out narrowly to Vivani in two of the three Israel stages which kicked off this year’s Giro.
“I had the power, I knew what I was capable of, but it’s one thing having the belief and another thing doing it.”
Sam admitted: “”Anything else now is a bonus. Obviously, I really want to win again, but it’s going to be more relaxing because today I felt a lot of pressure. There’s less opportunities after this stage and there are so many tough stages to come. I’m just so much more relaxed.”
Having already lost the services of his lead-out team mate Rudi Selig due to illness, Sam’s victory proved all the more impressive. Bennett opted to let Vivani’s Quickstep Floors team make the running up front, but ensured he kept tabs on the Italian speedster.
Said Sam: “They were really far back and I thought there was no way we’d come back because there was the chicane still to come and I thought for sure it would be one line so even if we did get back, would I still have the power still to go? There were a few close calls, but we made it.
“I could see the same thing with Lotto Jumbo, they went early and Viviani saw the opportunity. It was Viviani’s team mate that took his wheel to try to give him more breathing space and they closed the door there…”Today was about patience. At one stage I thought Quickstep had gone too early and they were looking back to check me out and I was wondering were they trying to panic me and get me to go early again. I was glad I kept my cool and it paid off.
“It was really disappointing to lose Rudi, but the guys did a great job today and I could see they had real big belief in me. I want to thank them all for the support, the team that’s working hard behind the scenes and everybody that helped me to get to this point in my career.” 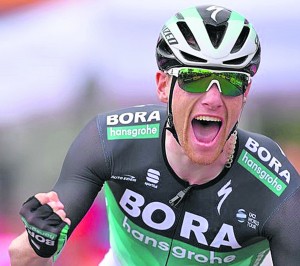 Sam’s win means he joins Shay Elliott, Stephen Roche and Martin Earley as Irish stage winners in the Giro and was the eighth overall Grand Tour stage win by an Irish rider, joining the ranks of the aforementioned, in addition to Dan Martin, Nicolas Roche, Philip Deignan and his local compatriot, Sean Kelly.
In a report by Shane Stokes (The Irish Times), the WIT graduate stated: “I feel relieved. I’ve been so close so many times in the Giro. To really get the timing right was key with so many fast sprinters here. It is not easy to beat Viviani. He really knows what he is doing. But I think my time came…at one point I thought it would never come.”
Sam Bennett’s time has come, and even greater days may well lie ahead for the Carrick rider.