Sticking With the Hard Sell

“Good people will do what they find honourable to do, even if it requires hard work; they’ll do it even if it causes them injury; they’ll do it even if it will bring danger. Again, they won’t do what they find base, even if it brings wealth, pleasure or power. Nothing will deter them from what is honourable, and nothing will lure them into what is base.” – Seneca
“We’d 28 lads togged out at the Gold Coast at half nine this morning,” Waterford Senior Football manager Tom McGlinchey told The Munster Express on Sunday evening, six days prior to the Deise’s latest Championship trip to Tipp.
“Ask any of those lads what it means to wear the Waterford jersey and you’ll get the same answer you’d get from any player in the county, from either code at any grade. It does count for something. It means everything.”
He continued: “Keeping the lads in a positive frame of mind when we’re coming into a match like this after the League not panning out as we’d have wanted hasn’t been easy. I’m not going to lie: maintaining lads’ motivation and enthusiasm levels when the results have gone against you is a hard sell. But that’s the reality facing most Division Four managers in any given year – Waterford isn’t alone in that respect. But there’s no escaping the fact that we’re in the hard sell business, a long way from the Super 8 we’ve heard so much about already, and all the hype and publicity that the big guns get come August and September in packed stadiums. We’d love to be in that company, who wouldn’t but we are where we are. And right now, we can’t look beyond Saturday night in Thurles, against a Tipperary team that, I feel, ought to have gone up into Division One for 2019. So that’s the scale of the challenge we’re facing and I’m not being in any way disrespectful to our lads when I say that Tipp would be most people’s favourites going into the game. I’m sure they’ve probably got one eye beyond the weekend and are probably looking to make the cut for the Super 8 in the long run and build on that great run they had in 2016, along with the progress they’ve made in the League. They’re a benchmark for counties like Waterford, and while they’ve advanced, for a whole host of reasons we’ve largely stood still, unfortunately.” 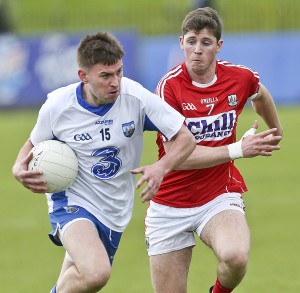 Waterford's Gavin Crotty gets the better of Cork's Kevin Crowley during their Munster Senior Football Championship clash last summer, when the Deise came within a whisker of their best Championship result in 60 years. | Photos: Sean Byrne

While some inter-county managers offer glib, colourless comment to even the most widely read titles, we’ve been blessed in these parts of late when it comes to both football and hurling bosses engaging with local scribes in an engaging, philosophical manner.
Off The Ball, Second Captains and Game On to name but three should do themselves a favour by adding Tom McGlinchey to their stable of regular interviewees. Talking football with him has never proven a hard sell from my perspective.
“To play devil’s advocate for a minute, just say we end up getting a bad defeat in Thurles, sure we all know the drill by now: you’ll have a few people around the county talking along the lines of ‘ah sure the football is only a waste of money’ and ‘why bother with the football at all?’ And I spent a few passing seconds on that kind of talk this morning, at half nine in the Gold Coast, with 28 lads togged out in front of me, rearing to go, out training for the second time with us this weekend when they might well have loved to have been somewhere else today or yesterday. But they weren’t somewhere else. They knew where they wanted to be, and they knew what they wanted to do for the morning. And I’ve spent most of the rest of the day since thinking about the efforts these lads, and all the other players who’ve togged out while I’ve been Waterford manager, have made for me and for that jersey. And it’s a pleasure to be have been involved with them. And that helps those passing thoughts, like the ones I’d had this morning, to drift away. I know, and the core of people who support and promote football in the county know exactly what the Waterford jersey means to each and every one of those 28 and that’s why I’d love to see the few breaks going their way on Saturday night.”
What’s made progress difficult during the McGlinchey era can be hung on quite a few hooks, but for me (as well as Brian Flannery and Thomas Keane), the absence of a meaningful, resourced long-term strategy for the game across the county remains the ultimate unticked box.
“If we started winning more games and performed like we did against Cork last year on a more regular basis, and if people were willing to work within a plan over a five to ten-year term, then I think there’d certainly be a return on that investment for football in Waterford. But again, I know that’s a hard sell – but that still doesn’t mean we shouldn’t sit down and talk about it.” In the short-term, the remarkable turnover in players on an annual basis has certainly done nothing to aid the Deise’s chances of pulling off an overdue Championship success, the last win being recorded against Clare back in 2010. 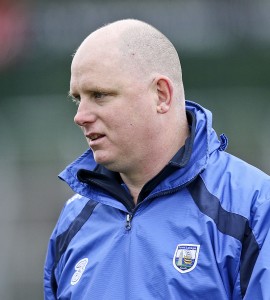 Tom McGlinchey has retained a stoical perspective throughout his term as Deise boss.

Said Tom McGlinchey: “Of the 20 players we had involved against Derry in the Qualifier last June, 11 of them are not available to us now, and if you go back to the Cork match and take Tadhg Ó hUallacháin into account, that brings the number up to 12. Now, by any stretch of the imagination, that’s one hell of a turnover and from a continuity perspective, given how well we played against Cork last summer in Fraher Field, that makes building momentum all the more difficult. And the only player from that missing 12 who I’d a expectation of having up until a few weeks ago was Paul Whyte, who is obviously out of the equation now and he’s been told he mightn’t ever play again due to the nature of his hip injury. Now it’s going to be a few months before we know anything definitive, and Paul will be busying himself with his rehab for quite some time to come, but it’s a huge blow for Paul, who loves his football so much and has given so much to both his club and county. It’s hugely disappointing to lose a player of Paul’s ability but all we want now is the best possible outcome for Paul and we hope his recovery will go well.”
He added: “Thomas O’Gorman isn’t available, Ray Ó Ceallaigh’s injury against Laois has proven a lot more serious than we first thought and it’s taking time for him to recover, Donie Breathnach is tied up with his studies, and Jack Mullaney is in the middle of his exams – in fact, he’s sitting one in Dublin at 4pm this Saturday, so he’s out of the equation. Tadhg (Ó hUallacháin) picked up a facial injury against Kilrossanty, which again was very unfortunate. It’d be great if they were all available, but we’ve prepared well over the past three and a half weeks, a full week more than we had prior to the Cork game last year, I feel we’ve put it to good use and the lads have worked incredibly hard. Dylan Guiry and Conor Murray are both in their second years now as senior players and have developed well, Eoin O’Brien has come into the panel this year, Shane Ryan as well, and it’s been great to see players growing the way they have at inter-county level, and I’m grateful for the commitment levels everyone has given me this year. Now, getting them back after the couple of rounds of Club Championship was like starting pre-season all over again with them in a lot of ways, but the attitude and work rate has been top notch. Our focus has been on the players we have available to us and what they can do, and that’s the mindset we’ve been in over the past three and a half weeks.”
Tipperary come into Saturday’s tussle in good shape, with only an injury-time defeat to Cavan preventing them from ascending to Division One of the National Football League back in the spring. “A lot of people are tipping them to reach the Super 8, which is understandable,” said Tom McGlinchey. “And it’s fair to say that Tipp have their eyes on and more power to them. But there’s nothing we can do about that. We can only concentrate on our own game and we’ll be giving it our all on Saturday night. As one of the players commented on after training, a Championship match draws another 10 per cent out of any player in a way a League match doesn’t. We know we’ll have to call on that extra 10 per cent against Tipperary, and if we can do that, then as a manager that’s all I can ask for. And to have a positive result as well as a positive performance would be absolutely huge for us.” It’s a period of enormous change in inter-county GAA, although it’s difficult to identify any potential benefits for Port Láirge at senior football level.
For Full text of this Interview with Tom McGlinchey see Sport Section of this Week’s Munster Express Newspaper