Eastern Intermediate Hurling Championship
Dunhill 2-17
Ballyduff 0-22
A superlative display by Dunhill’s Shane Casey, in addition to a contentiously awarded 22nd minute Darryl Swift point, ultimately proved the difference between these neighbours at a sun-kissed Kill on Saturday evening last.
On a thickly sodded pitch, Dunhill and Ballyduff produced a terrific hour’s hurling, a game whose competitiveness and quality will probably have exceeded quite a few Senior Championship fixures staged between now and season’s end.
The only pities of the evening arose from the awarding of that 22nd minute point which, in the view of the three note-taking observers in attendance, appeared to be wide of the intended target, coupled with the fact that such a fine contest, staged on so glorious an evening, drew such a small gate.
At the break, Dunhill went in with a slender 1-9 to 0-11 advantage after a half which compellingly ebbed and flowed.
Ballyduff’s Jack Lyons, as impressive a performer over the hour as Shane Casey, opened the scoring after four minutes, with Casey replying with a free two minutes later.
Lyons produced a superb catch and strike moments later, only for Casey to reply with two quickfire efforts in the eighth minute.
Lyons then produced a brace of his own via a 65 and free before former inter-county man Jack Kennedy landed his only point of the evening for Ballyduff in the 10th minute.
The imposing Lyons turned over a 12th minute free to leave Ballyduff 0-6 to 0-3 ahead, before Ronan Dunphy and Lyons extended their lead to five points by the 17th minute. 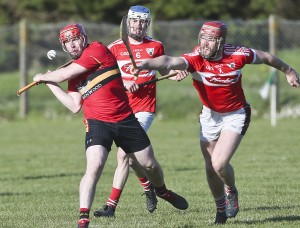 Dunhill's Shane Casey gets in his shot despite the intentions of Ballyduff's Ronan Dunphy during their Eastern Intermediate Hurling Match in Kill on Saturday last. | Photos: Sean Byrne

However, Shane Casey’s 18th minute free broke Ballyduff’s momentum, while also ending a 10-minute wait for Dunhill’s fourth point.
Casey converted a 65 just a minute later, followed by another Lyons free at the opposite end which in turn was followed by Swift’s controversial white flagger after 22 minutes. Barely a minute later, Dunhill full-forward Cillian Bonner (by then on a yellow card) saw his shot diverted into the net off the hurl of Ballyduff netminder Ryan Murray to bring the sides level. Lyons and Casey exchanged frees in the 25th and 26th minutes before Casey boomed over a free from inside his own 65-metre line. The repositioned Eamonn Murphy found his range with a fine 29th minute point, while Ballyduff’s Ronan Dunphy completed the first half scoring.
The second half again proved tight and engaging, with Dunhill getting a dream start thanks to Michael Murphy’s close-range goal following Ben Gallagher’s assist (2-9 to 0-11).
Ronan Dunphy and Jack Lyons led the Ballyduff reply with 32nd and 35th minute points before Ben Gallagher impressively found his range following Eoin Casey’s sideline cut. The rampaging Bonner pointed in the 38th minute, latching onto Conor Quinn’s deep, diagonal pass, only for Calum Lyons to produce an immediate scoring response from Ballyduff’s next attack. Shane Casey and Jack Lyons maintained their exhibition-like levels of free-taking in the 39th and 41st minutes respectively, before Casey landed another free following fine work by Cillian Bonner. 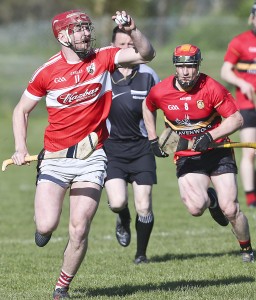 Jack Lyons turned over a monstrous free from his own half-back line as the game reached its three-quarter mark to leave Ballyduff just three points in arrears, and he repeated the trick from just inside his own 65 in the 46th minute. In response, Shane Casey steered over another terrific free wide on the right from 60 metres, before Ronan Dunphy found his range again after a shot from Lyons struck the very top of Colm Keane’s left hand upright. Ballyduff deservedly drew level thanks to another brace from Jack Lyons in the 50th and 51st minutes, the second picked off after a tremendous contest for possession between Lyons and Dunhill centre-back Tomás Casey.
Shane Casey landed another free in the 52nd minute, with both sides sending decent scoring opportunities wayward before Ballyduff substitute Craig Tyrrell levelled matters with four minutes remaining.
Casey steered another free between the posts in the 59th minute after a free was awarded on the halfway line for a chop and it was fitting that the man of the match effectively sealed victory a minute into additional time with an outrageous 50-metre effort from the right channel.
Jack Lyons pulled a free wide from a difficult right-sided angle in the 62nd minute before finding his range from the halfway line to leave just the minimum separating the sides. And while Ballyduff made their feels known to officials about Dunhill’s 22nd minute point following the full-time whistle, it’s fair to say both management teams will have been pleased by the effort and application produced by their respective units in this first Championship run-out.