Home » Sports » Soccer » Blues through to the last four of the EA Cup.

Blues through to the last four of the EA Cup.

“It’s unusual that we now have a mini pre-season”. Joe Gamble
“We’re happy enough with that. Obviously getting into the last four of any competition is great and I suppose that was the aim coming here to Bray this evening so it’s good to get the job done.”That was the opening comment of the Waterford FC First Team coach Joe Gamble after the game in Bray. Alan Reynolds, the manager had to watch the match from the stand as he was serving a one match suspension. This was the last game the Blues will play until June 28th against Bohemians. He then went on to talk about the future. 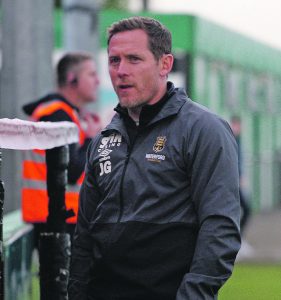 “We always wanted to be in the draw for the last four so it’s mission accomplished. It was a great free kick from Scott Twine to win us the game. In fairness to him, he practises a lot of them in training, he showed great technique so I’m not surprised that it went in.“We’re happy with the win, but performance wise there is a bit more from us. It’s good to get two clean sheets in our last two games. We’re in the last four, so it is what it is really. We won the game tonight and that’s the most important thing.“It’s nice to be going into the break now with two wins under our belts and two clean sheets. We’re not talking about missed opportunities and to get to the last four is fantastic. This club hasn’t won much silverware so this is a good chance. We have to look forward now and see what happens.
“It was brilliant to have Kenny Browne back for the game tonight. He has been very unfortunate with injuries, especially to get the same injury twice. It’s a very unusual injury in his tendon and it takes a while to heal so it has been tough for him.“He has worked hard to get back and I suppose he’ll have a lot more time to get himself fully fit over the next five or so weeks. It’s very unusual that we now have a mini pre-season so to speak between now and our next game against Bohs on June 28th.“I think that the break will give us a chance to bring more bodies in and we’ll look at where we need to strengthen up. We’ll see a few players go and hopefully we’ll be able to improve in certain areas ahead of the second half of the season.
“It’s five weeks of work from our point of view, but we need to be ready to give things a right go when we come back on June 28th. We need to be fit, ready, organised and raring to go for the second half of the season. The break has its pros and cons.
“I think from our point of view we’ve to look at the positives of it and we need to get better in other aspects of our game. Hopefully we can do that in the next five weeks. We have a small squad and this will give us the chance to add more quality to it. We need to get stronger as a team and that little bit more organised.”