Bray buried and now it's Derry for the Blues

EA Sports Cup, Quarterfinal
Bray Wanderers 0
Waterford FC 1
Scott Twine, who joined the club on loan at the start of the season from Swindon Town, struck a wonderful 15th-minute free kick that proved to be difference at the final whistle at the Carlisle Grounds last week as the Blues can now look forward to a semi-final clash with Derry City at the Brandywell Stadium on Monday, August 5th. It was not the draw the players and the fans wanted but nevertheless a win in Derry is without doubt possible. This is the first time the club have reached the last four for ten years. This was Scott Twine’s last appearance for Waterford FC as he returned to his parent club, Swindon Town the following morning.
It was good to see Kenny Browne make a return after last featuring for the club in a 0-0 draw against Bohemian FC in March and the central defender managed to get a good 70 minutes under his belt before he was replaced by Damien Delaney. 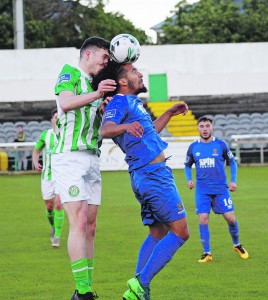 Bastien Hery in an aerial battle against Bray last Monday.

Browne was one of five changes to the side that beat UCD with Shane Duggan, Shane Griffin, Izzy Akinade and goalscorer Twine coming into the starting line-up in place of Delaney, Karolis Chvedukas, JJ Lunney, Aaron Drinan and Zack Elbouzedi, who all dropped to the bench.
The Blues had the first chance of the game on 11 minutes when Izzy Akinade laid off a Maxi Kouogun clearance to Cory Galvin, who cracked in a shot from the right-side of the penalty area, but his effort struck the side-netting.Waterford struck for the only goal four minutes later when referee Rob Harvey spotted that Bray defender Hugh Douglas tugged back Izzy Akinade and Scott Twine made no mistake when he beat Gabriel Sava with a brilliantly taken free kick that found the top left-corner of the net.
Sava made a stunning save to keep his side in the game sixty seconds later when he turned a stinging drive from Cory Galvin over the crossbar.Bray had their first chance on 30 minutes when Joe Doyle set up Dylan McGlade, but Matt Connor made a decent stop.
Scott Twine should have won a penalty two minutes later when he was clearly tripped but referee Rob Harvey waved play on. Darragh Gibbons should have hit the target with a header after a Dylan Barnett corner kick on 35 minutes, but his effort went wide.
A brilliant Waterford move involving six players saw Bastien Héry set up Shane Griffin, who fed the ball to Cory Galvin but his effort took a deflection that took the ball just wide of the left-hand post.Matt Connor produced a top save to keep his side in front on the stroke of half-time when McGlade cracked in a shot from the left-side of the penalty area, but the netminder tipped away the ball. Cory Galvin had the first chance of the second period on 54 minutes when he took a pass from Akinade, but he fired wide.
The post denied Bray Wanderers the equalising goal on the hour mark.Referee Harvey allowed the hosts take a quick free kick and Luke Nolan played the ball in for Joe Doyle but his shot came crashing back off the near post with Connor beaten.Izzy Akinade should have done better with a chance way on 62 minutes when he raced onto a pass from Bastien Héry but he blazed into the side-netting, and soon afterwards Aaron Drinan, who replaced Cory Galvin, forced Gabriel Sava into a fine save.Zack Elbouzedi linked up well with Shane Griffin on 88 minutes, but Sava was equal to his shot before Joe Doyle missed a glorious chance to level in the second added minute when he latched onto a flicked Hugh Douglas pass but the striker blazed wide as the Blues held out for a cup semi-final passage.