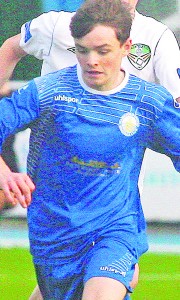 Waterford United took all three points from this thrilling game at the RSC on Saturday last. The Blues led 2-0 at the interval but the visitors were back on level terms five minutes in to the second half.
The home side regained their lead on 65 minutes but Cabinteely equalised one minute later and with six minutes played in stoppage time a draw looked on the cards but the Waterford captain Eoin Porter stepped up to score a dramatic penalty to secure an incredible win for the Blues who went top of the table following this extraordinary victory.
Luke Kiely had the first chance of the game inside the opening minute when he fired in a free kick from 25 yards that was well held by the keeper before Blues keeper Jack Dolan did well at the second attempt to save from visiting striker Jordan Andre on three minutes in what was a lively start to the game.
Eoin Porter turned provider for a Blues chance on nine minutes when he set up Justin Croke on the left side of the penalty area but just as he was about to fire a shot on goal, his jersey was clearly pulled back and after the ball went wide, referee Pat O’Connor awarded a
corner kick to the annoyance of Blues captain Porter.
The breakthrough did arrive for the Blues two minutes later when a brilliant through ball from Eoin Porter saw Cabinteely defender Dylan Fleming fail to deal with the attack and Owen Wall took full advantageto round the advancing Sean Hyland to slip the ball to the back of an empty net.
An excellent Blues move yielded a deserved second goal on 26 minutes when some good play from Porter set up Justin Croke just inside the penalty area and he beat the visiting keeper Hyland with a neat right-footed shot to the far left corner of the net to put his side in
the driving seat
Cabinteely missed an absolutely glorious chance to pull a goal back three minutes into first half added time when Simon Power got free down the left side of the penalty area before putting the ball on a plate for Jordan Andre, who looked certain to score but he blazed high
over the crossbar from ten yards.
After missing that brilliant chance Andre made total amends within the opening minute of the second half when he took a pass from Jamie Broderick before giving keeper Dolan no chance with a right-footed finish from 14 yards to bring his side right back into the game.
The sides were level on 50 minutes when Dylan O’Connor took advantage of some poor defending to race onto a through ball from Gavin Howardand he had the simplest of tasks in slipping a right-footed shot to the corner of the net past a helpless Jack Dolan from deep inside the
penalty area
A stunning goal regained the lead for the Blues on 65 minutes when Jordon Molloy took possession of the ball just outside the penalty area on the right side and he gave the Cabinteely goalkeeper Sean Hyland little chance with a crisp right-footed finish
that flew into the back of the net.
The lead lasted less than a minute. A ball out of the defence from Dylan Fleming caused panic at the back and it was winger Simon Power that took advantage to tap the ball home from close range past a stranded Dolan.
Then came the high drama in the sixth minute of added time when Justin Croke delivered a free kick in from the left aimed for Sean Roche, who was pulled to the ground by Quinton Kavanagh under the nose of referee PatO’Connor and Eoin Porter fired home the spot kick to the sound of the final whistle after a thriller.
WATERFORD UNITED: Jack Dolan, Cian Flanagan, Shane Ryan (Tommy Teer
’72), Darragh Corcoran, Tunmise Sobowale, Dean Beresford (Sean Roche
’66), Owen Wall (Gearoid Murphy ’83), Jordan Molloy (Sean Martin ’88),
Eoin Porter, Justin Croke, Luke Kiely (Ryan Lambe ’46)
CABINTEELY: Sean Hyland, Adam Maher, Jamie Broderick, Robert Keogh
(Adam Foley ’90), Dylan Fleming (Quinton Kavanagh ’72), Gavin Howard,
Joe Rafferty (Eoghan O’Neill ’46) Dylan O’Connor, Jordan Andre, Ross
Broderick (Craig Canty ’46) Simon Power
REFEREE: Pat O’Connor assisted by John Ferncombe and Sean Purcell