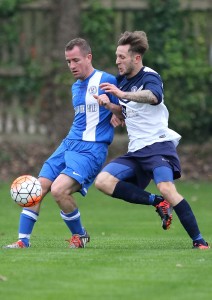 Reigning champions Hibernians were guaranteed the three points inside the opening half an hour because at that stage they were leading seven nil against a Waterford Crystal team who must have thought they were hit by a steam train.
Every time the hosts attacked they managed to score and the spectators who turned up at Mitchel Kennedy Park found the entire fare rather strange to say the very least.
The win has moved Hibernians right back into the title race. During the week they received an extra two points following a misdemeanour on a match card filled in by Ferrybank in a recent game so all in all it proved to be a good one for David Breen’s men.
Gary Keane sprayed the ball out wide right to Mark O’Keeffe after three minutes and the latter beat the Crystal goalkeeper Derek Hearne at his near post.
Mark O’Keeffe scored his second goal on eight minutes when he found the roof of the net from 20 yards after controlling a neat pass from Paul Quilty.
Two minutes later the home side made it 3-0 when Mark O’Keeffe squared the ball to Paul Quilty who duly touched the ball into an open net from six yards.
Philip Drohan got in on the goalscoring act on 15 minutes. Craig Keane played the ball down the left flank to Drohan who cut in past two Crystal defenders before curling a delightful effort into the far corner of the net.
David Cooley created goal No 5 after 20 minutes by slicing open a ragged Crystal defence and Paul Quilty had no difficulty placing the ball past a stranded and shell-shocked Derek Hearne in between the Crystal posts.
Quilty completed his hat-trick on 22 minutes when he moved forward to meet a left wing cross from Philip Drohan. Paul Gahan replaced the injured Drohan after 26 minutes and carved out the seventh goal of the one sided contest. Three minutes after his introduction Gahan was allowed the freedom of the pitch and when he released Mark O’Keeffe the in-form Hibernians striker completed his treble without any great deal of difficulty.
Match referee John Ferncombe and one of his assistants Gary Fitzgerald did not appear for the second half as both picked up slight injuries during the opening 45 minutes and another of the assistants, Anthony Walsh took over as the match official.
There is no doubt that the Waterford Crystal players would have liked remain in the dressing rooms also but in fairness to them they held Hibs scoreless in the second half and they went close on two occasions through Liam Coady and Barry Ryan but that said the game meandered to its inevitable conclusion long before the replacement referee blew the fulltime whistle.
HIBERNIANS: Sean Whitty, Joey Whelan, Craig Keane, Brian Mallon, Michael Gaffney, Gary Keane, Jason Keane ( Maurice Shanahan `63) David Cooley, Paul Quilty (David Kennedy`71) Mark OKeeffe, Philip Drohan (Paul Gahan `26)
WATERFORD CRYSTAL: Derek Hearne, Niall Kirby (Ian Griffin `51) Colm Clancy, Stephen Bible, Mitchel Casey, Liam Coady, Jason Halloran, Barry Ryan, Kondwani Ngwira, Niall O’Toole (Ian Barry `51) Oliver Murphy.
REFEREE: John Ferncombe. Assistants Gary Fitzgerald and Anthony Walsh. Ferncombe and Fitzgerald retired injured and Anthony Walsh officiated the second half.