Paddy Joe Ryan hoping for smoother club waters
In his address to delegates at last Thursday’s County Convention at Lawlor’s Hotel, Dungarvan, County Board Chairman Paddy Joe Ryan apologised for the delay in completing some of this year’s Championships.
On the 13th occasion that he has addressed delegates as Chairman, he pointed out that “without doubt the past year has proven to be my most challenging as Chairman”.
“It has always and will always be my purpose in this role to do my best for the GAA in Waterford and further the interests of all stakeholders,” said Paddy Joe. “There is no hidden agenda or personal cause to pursue.”
He added: “As with any organisation there are always competing viewpoints to consider and sometimes tough and unpopular decisions may need to be made that is the nature of any administration, not just the GAA, but the clubs, the players (Club and County) and the real GAA people of this county are always at the forefront of my mind and the people I wish to serve.” 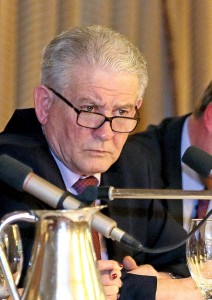 County Board Chairman Paddy Joe Ryan listening intently as a questions is fielded from the floor at last Thursday's County Convention at Lawlor's Hotel in Dungarvan. See Sport 2 and 3 for more. | Photo: Noel Browne

Paddy Joe Ryan said the County Board found itself at the centre of an unnecessary media storm at certain times this year, which had distracted from the real business that has to be done and detracted from the great work that is ongoing.
“Some criticism was levelled at me personally during the year by some media quarters for my staunch opposition of the new Hurling Championship at the GAA Congress, but that was my unanimous mandate from the clubs as they are the ones who will be most affected by it.”
He continued: “As you all know we had serious difficulties in getting our championships played off this year despite the very best efforts of our Fixtures Committee, who met on over 40 occasions, but in many cases their hands were tied as regards playing matches.”
In line with officials in other counties Paddy Joe Ryan told delegates that he “firmly believes that the GAA need to look at the whole structure, including the club structure on a national basis because otherwise our clubs who are the backbone of the Association will be forgotten”.
“There has been a lot of comment this year about the club scene in Waterford and he delay in getting matches played and then the hectic schedule towards the latter end of the year, this should not happen in an ideal world and it is not the wish of the board or the clubs and certainly not the club players to have a congested calendar like this” he said.
He pointed out “the restructuring of the (Senior) Club Football championship for 2018 will be discussed at the January County Board meeting to try and find a satisfactory solution for all interested parties” but pointed out that the new Inter-County Hurling structure will bring a fresh set of challenges in that regard.
The chairman pointed out that while County Convention and the first delegate meeting of the year are well attended meetings, the other monthly meetings are not so well attended.
He also noted that the outgoing officers were the only ones nominated for positions on the incoming Board, which he took as a vote of confidence. Yet he added that if those who criticise the Board wanted a chance to make changes, they could do so by attending meetings or standing for office. (See Sport 2 and 3 in print edition for more)