“Thanks Tom for sending me a copy I look forward to learning even more about Irish athletics through the years.” – Sonia O’Sullivan
In the company of family, friends and bookworms from near and far, Clonea native Tom Hunt launched his latest title ‘The Little Book of Irish Athletics’ at Waterford’s Book Centre on December 8th.
Described by publishers History Press Ireland as “reliable reference book and quirky guide,” Tom’s latest tome is “a compendium of fascinating, obscure, strange and entertaining facts (which) can be dipped into time and time again to reveal something new about Ireland’s proud sporting heritage”.
And on that count, this latest Little Book (Tom has already authored ‘The Little Book of Waterford’) does exactly what it says on the tin. It’s a astutely written work, dating from 1856 right through the present day, packing a tremendous level of well-researched copy into its 13 chapters and 60,000-odd words.
Tom, a teacher by profession, is a long-term Deise exile in Mullingar, and a member of a family is inextricably linked to local sport; his brother John has been a respected GAA referee for many years while nephews Stephen and Noel have enjoyed distinguished soccer careers. And he was delighted to see so many old neighbours from Clonea-Power and Rathgormack turned out for the launch of a book whose publication couldn’t have been better timed in terms of the Christmas market. 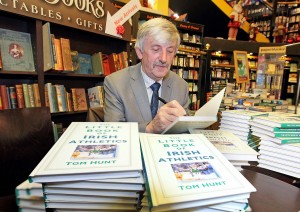 “I never need too much of an excuse to travel down home as it is,” said Tom, “so when it came to having a launch for this book, right from the off I was keen on having one here in Waterford. I dropped in to the Book Centre several months ago, when I met with John Cotter, and that set the ball rolling. So I was delighted to get the chance to talk about the book on home soil. There’s quite a local flavour to some of the chapters, between Waterford and South Tipperary, which is thoroughly justified given the achievements of athletes such as John Treacy, Peter O’Connor and Tom Kiely, who were among the best in their disciplines globally when they competed, and in more recent times, Waterford athletics can take great pride in Kelly Proper’s remarkable National Indoor record, and of course you have the Barr siblings, Jessie and Thomas, who have both worn the green vest at Olympic level, with Thomas coming so close to taking a medal over the 400 metre hurdles in Rio. We’ve an awful lot to be proud of and it was a pleasure, as a born and bred Waterford man, to detail some of their achievements in the book, and fingers crossed there’ll be more to come at the Tokyo Olympics and beyond.” 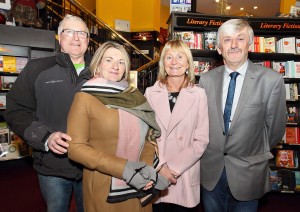 Paul and Catriona O’Callaghan (great grand-daughter of Maurice Davin) pictured with author Tom Hunt and his wife Mary at the launch of The Little Book of Irish Athletics at the Book Centre.

The book details the astounding level of politicking (and squabbling) involved in the organisation of Irish athletics, and gives rise to one of Tom’s most quotable passages: “Irish athletics has few rivals for the honour of being the most influenced by politics anywhere in the universe.”
And ask anyone who has had any level of engagement with the national body down through the years, under its many guises, be it the BLE or Athletics Ireland: Tom well and truly nails it in a chapter titled ‘Managing The Sport (1922-2017), which is worthy of several re-reads. Indeed, the politicking leaves even the GAA standing in its tracks!
With talk of ‘Ireland’s Greatest’ thick in the sporting air following the RTE series, Tom Hunt felt a wider and more rounded debate on our greatest ever sportsperson would lead to one outstanding candidate: Sonia O’Sullivan. 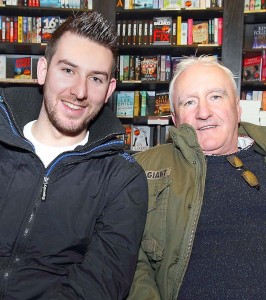 Pictured at the launch were Paudie Hunt and Gerry Kirwan.

“John Treacy, and he’s said it more than once, that he has no doubt that Sonia was the greatest. Her collection of medals is extraordinary in terms of World and European titles and of course the 2000 Sydney Olympic 5,000 metres final was one of the greatest races in history, with herself and Gabriela Szabo battling it out down the home stretch, stride for stride. Of course it’s a great pity that she didn’t win Olympic gold but her record was extraordinary. I doubt if we’ll ever produce an athlete like Sonia again, to be honest.”
Tom is by now a seasoned author, having penned ‘Portlaw, County Waterford, 1825-1876: Portrait of an Industrial History and its Cotton Industry’, ‘Sport and Society in Victorian Ireland: The Case of Westmeath’ and ‘The Little Book of Waterford’.
And his latest effort, featuring an ecstatic John Treacy crossing the finishing line at the 1984 Los Angeles Olympic Marathon, will make for a welcome addition to book shelves throughout the country.
The Little Book of Irish Athletics is published by The History Press Ireland