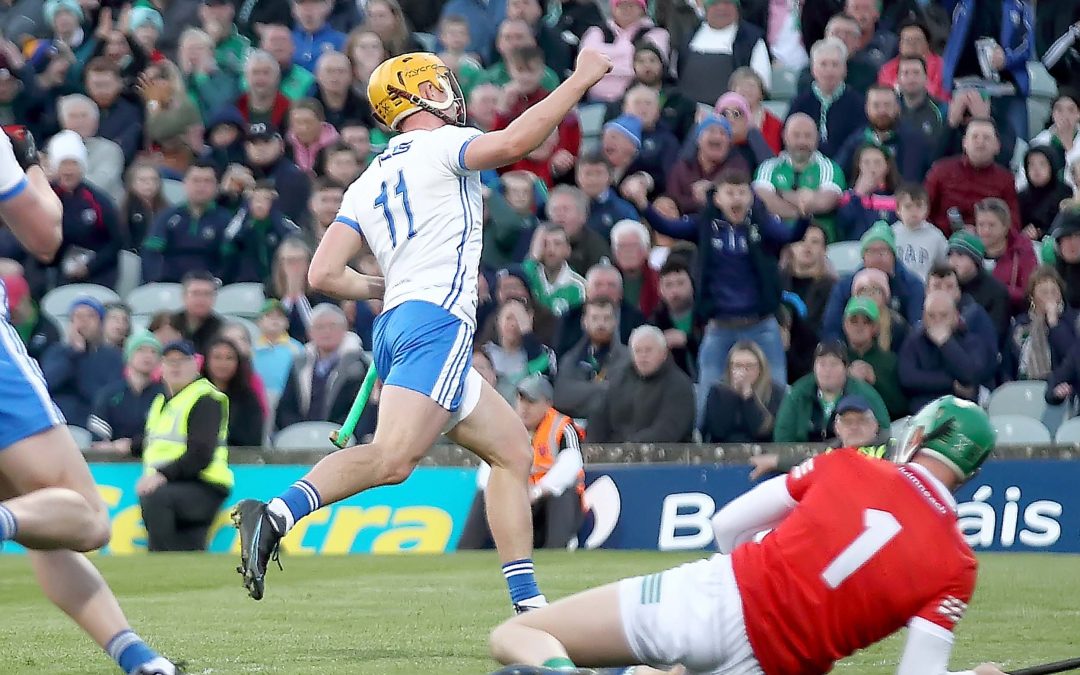 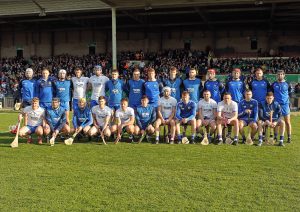 Waterford suffered their first defeat in this season’s Munster hurling championship when going down by just three points to reigning champions Limerick at the Gaelic Grounds on Saturday evening last.

This round two tie was billed as the title holders versus title contenders, All-Ireland champions against league winners which very much lived up to expectation. 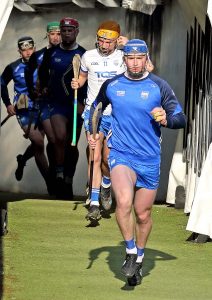 Waterford captain Conor Prunty leads out his team on Saturday night against Limerick.

Limerick had prevailed by 11 points in the two previous championship meetings between the sides but the gap has certainly closed on this evidence.

This was an absorbing contest of high quality throughout with both teams contesting every single ball as if their lives depended on it.

The ferocious tackling which has become a trademark of this multiple All-Ireland winning Limerick side was evident from early on and celebrated by John Kiely and his management team as most would the scoring of a goal.

Little separated the teams at the break with Limerick leading by minimum having played into the breeze towards the town end.

Effectively ten minutes half way through the second half decided affairs. The sides were deadlocked at 0-21 apiece on 52 minutes when the home side put over seven points in succession to take command of the game and lead 0-28 to 0-21 with just eight minutes of normal time to play.

While Waterford hit two goals inside a minute from Bennett and Prendergast to make the closing interesting, late points from substitute Pat Ryan and Diarmuid Byrnes confirmed victory for the home team.

Manager Liam Cahill had Austin Gleeson in from the start with Iarlaith Daly also replacing his brother Carthach in defence.

In a positional switch captain Conor Prunty started at left half-back with Daly assuming his spot on the edge of the square detailed with marking Aaron GIllane as Prunty was assigned duty to follow Gearoid Hegarty.

Limerick had Conor Boylan replacing the injured Kyle Hayes in their only change from the demolition of Cork in the opening round.

Waterford began brightly and had points from Bennett (2f) and Dessie Hutchinson to lead 0-3 to nil after five minutes.

Michael Kiely had a goal opportunity to swell the Déise lead but his effort was blocked by the excellent Barry Nash.

The champions were dealt a major blow when current ‘Hurler of the Year’ Cian Lynch limped out of the game after just nine minutes.

Substitute Cathal O’Neill pointed with his first touch for the Limerick men, however Waterford were far more efficient in the opening quarter.

Liam Cahill’s men led 0-8 to 0-3 at the end of the opening quarter with Calum Lyons landing three stunning points in this opening period.

Iarlaith Daly too was impressive with Jack Fagan much more influential than in Waterford’s opening victory over Tipp at Walsh Park. 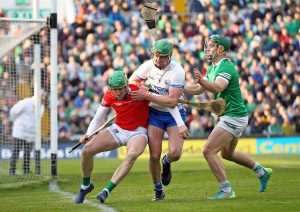 The lack of Waterford supporters among the official attendance of 27,488 meant each score for the visitors to the Gaelic Grounds was greeted with eerie silence while the opposite was the case for the home team in green.

This lack of support was something noted by the Waterford bainisteoir who in his post-game interview implored Déise fans to get behind their team for the upcoming fixture against Cork at Walsh Park.

The second quarter was much better for the home side. Limerick outscored Waterford 0-11 to 0-5 in this period. 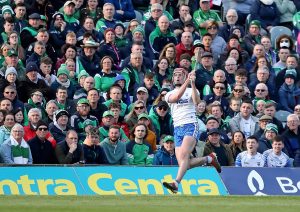 Waterford’s Calum Lyons was in top class form during the first half and here he is scoring another great point on the run.

The intensity from Kiely’s side increased a notch or two and when Shane McNulty was hounded into over-carrying the Limerick management danced along the side-line in delight with Diarmuid Byrnes nailing the resulting free.

Iarlaith Daly picked up a leg injury with Tom Barron being introduced for his championship debut.

Aaron Gillane began to take control of the game hitting four points from play with Diarmuid Byrnes also managing a quartet of white flags before the half-time whistle.

Limerick led 0-14 to 0-13 at the interval. Austin Gleeson too was showing up well pointing from play, line-ball and a couple of long distance frees in the first-half.

Referee Sean Stack had a firm hold on proceedings and penalised both teams correctly for throwing the ball rather than executing a correct hand-pass.

The second half was end to end with the sides’ level on five occasions, Dessie Hutchinson with four points in the third quarter doing most to keep Waterford in contention.

Austin Gleeson, following a great solo run, saw his goal bound shot in the 48th minute beat goalkeeper Nickie Quaid only to be blocked by a covering Sean Finn .

The champions, as champions do, responded superbly to the challenge presented. Declan Hannon, Diarmuid Byrnes dominated at half-back with Darragh O’Donovan, Gearoid Hegarty, Cathal O’Neill and Tom Morrissey all improving as the game progressed. In front of goal Aaron Gillane was proving a handful.

Limerick’s purple patch from the 52nd to the 62nd minute garnered seven unanswered points from David Reidy, Tom Morrissey, Darragh O’Donovan (2), and three from Aaron Gillane to lead 0-28 to 0-21.

Graeme Mulcahy also really should have done better when he wasted a gilt-edged goal chance after 54 minutes but fell over when he received the ball on his own in front of goal. O’Brien and the covering Déise defence managed to smuggle the ball away to safety. 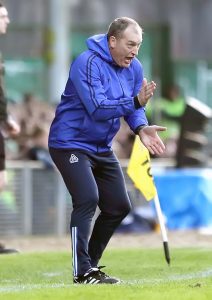 Waterford manager Liam Cahill urges his team during the second half.

Waterford needed goals and they got two in a minute. Stephen Bennett managed to squeeze a 20m free past a packed goal-line after 63 minutes while moments later Calum Lyons careered through the Limerick defence before placing Jack Prendergast to shoot low to the Limerick net, 0-28 to 2-21 and remarkably the margin was now just one point.

Darragh O’Donovan, Gillane and Cathal O’Neill all hit wides before late points from Pat Ryan and Diarmuid Byrnes closed out the game for another home win for the champions.

Shaun O’Brien was unbeaten and did well to deny Mulcahy his goal effort.

Conor Gleeson and Shane McNulty performed well with Iarlaith Daly also looking good before going off injured. Jack Fagan was impressive here with Calum Lyons back to his best having started the game at centre-field.

In attack much of the heavy lifting on this occasion was left to Austin Gleeson and Dessie Hutchinson with Curran, Bennett and Kiely managing just a point from play between them. Tom Barron looked more comfortable when switched to half-back at the start of the second-half while Neil Montgomery, Carthach Daly and Pauric Mahony all arrived too late to influence proceedings.

Aaron Gillane was well deserving his man of the match award hitting six points from play over the 70 minutes from all angles in a tour de force performance. Mike Casey and Barry Nash gave very little away with Hannon and Byrnes the launch pad for much of Limerick’s attacking pay. Darragh O’Donovan was impressive at centre-field with Gearoid Hegarty, Tom Morrissey and substitute Cathal O’Neill supplying most support to Gillane in attack.

Limerick and Waterford may well meet again this season and with the gap obviously closing there are many narratives yet to be written in this possible trilogy.

Waterford will face Cork at Walsh Park in round three on Sunday May 15th.